Tops Supermarket Reopened, But Some Employees Aren't Ready To Go Back 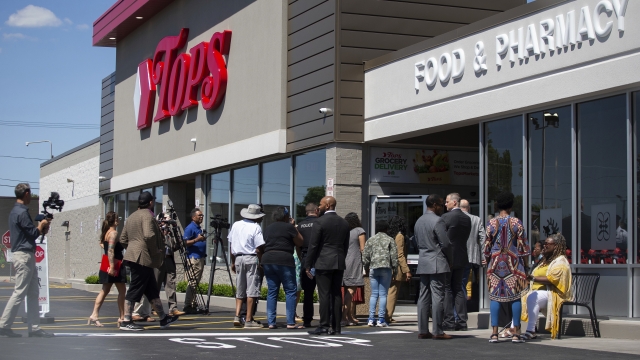 SMS
Tops Supermarket Reopened, But Some Employees Aren't Ready To Go Back
By Amber Strong
By Amber Strong
July 14, 2022
Employees are returning to work at Tops grocery store, two months after a mass shooting killed 10 people there.

The day started with prayer at Tops grocery store, marking a new beginning for shoppers on the east side of Buffalo, New York.

The grocery store reopened to the public Friday with a complete renovation.

The store on Jefferson Avenue — the site of a deadly mass shooting that killed 10 people — is the only store in the east side neighborhood.

Manager Pat Patterson is glad to see it reopen, saying faith and counseling have helped him process the past two months.

According to Tops, 75% of employees have returned to work.

But one employee tells Newsy the memories from that day are still too raw.

"I don't care if they tore down and rebuild it," Brooklyn Hough said. "I don't ever want to go back to that place."

Hough was working inside the store when the shooting took place. She locked herself in an employee bathroom, waiting for the gunfire to stop.

"The first thing I seen was the blood, and I seen bodies," Hough said. "That smell, the blood smell, and I just start screaming. And as I was screaming, I was on the phone with my mom telling her, you know, 'Please come get me.'"

Trinetta Alston is a nurse with the Community Health Center of Buffalo. She and her team have been treating store employees from the start.

"When we first got there, it was talking about it with those that wanted to talk and get it out," Alston said. "That, I would say, was the hardest part. That was the hardest part for me, because I'm talking to grown men who were raised at a time where men aren't supposed to cry."

Her group has offered free counseling and support for employees, but even she struggles with it all.

"How do you tell them it's going to be okay?" Alston said. "They tell you how they can't sleep because when they go to sleep, they see these bodies. But instead of seeing the bodies of who they are, they see their kids."

Representatives from Tops say employees were given the chance to transfer to another location. Some community members are calling for a new store, but that would leave residents there without a grocery option for years.

Hough has transfered to a different Tops location until she can find another job to provide for her two children. She says she’s taking it all one day at a time, with nurse Alston by her side.

Whether they stay or go, members of the community say they will remain united,  Buffalo strong.