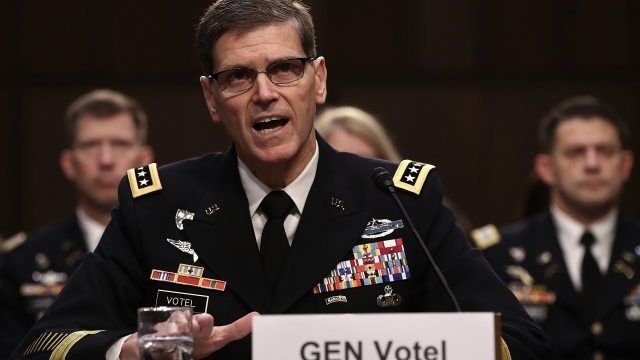 A top U.S. commander told a Senate panel Tuesday that President Donald Trump didn't consult him before making the decision to withdraw U.S. troops from Syria.

"I was not aware of the specific announcement. Certainly, we are aware that he has expressed a desire or intent in the past to depart Iraq, depart Syria," U.S. Central Command Commander Army Gen. Joseph Votel.

That was during the Senate Armed Services Committee's hearing on the president's December announcement to pull military forces out of Syria on the claim that ISIS has been defeated.

Several officials have since challenged that assertion.

Last week, the U.S. intelligence community testified that ISIS is not only alive, it's committed to a comeback.

"The fight against ISIS and violent extremists is not over, and our mission has not changed. The coalition's hard won battlefield gains can only be secured by maintaining a vigilant offensive against a now largely dispersed and disaggregated ISIS that retains leaders, fighters, facilitators, resources, and the profane ideology that fuels their efforts," he said.

On Monday, the Senate voted in favor of an amendment opposing the withdrawal of U.S. troops from Syria and Afghanistan due to ongoing threats in those countries.

And a recent Defense Department Inspector General report found that without counterterrorism pressure, ISIS could resurge in Syria within six to 12 months and regain territory.

Gen. Votel also testified that while there are no specific time or conditions limits for the withdrawal, it will be executed in "a very deliberate manner."