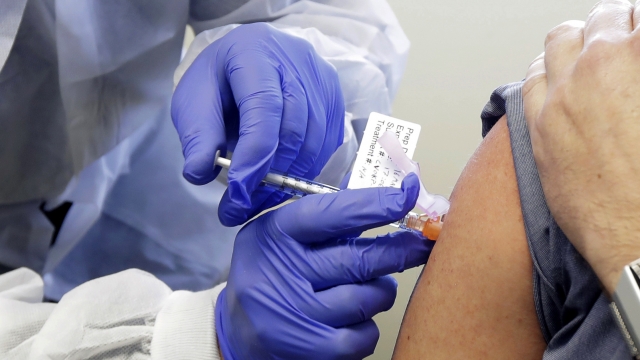 SMS
Health Official Says Vaccine To Be Ready In January, Not This Month
By Alex Arger
By Alex Arger
October 10, 2020
The official's timeline contradicts the president, who said a vaccine would be ready before the election.
SHOW TRANSCRIPT

An official leading the Trump administration's response to the pandemic says a vaccine could be available in the U.S. in January - not this month as the president suggested.

In an email Friday, Dr. Robert Kadlec said the administration was accelerating production of a safe and effective vaccine.

But Kadlec's statement counters President Trump's recent comments on the vaccine's schedule. He's claimed at rallies, debates and press conferences that the vaccine could be ready much earlier.

"So we've manufactured all of the necessary supplies so that as soon as the FDA approves the vaccine and as you know, we're very close to that, we'll be able to distribute at least 100 million vaccine doses by the end of 2020 and a large number much sooner than that."

Kadlec says those doses could be available by the end of this year, but there would still be a long process to get emergency authorization to administer it, and it will take time to distribute.

Kadlec isn't the only one to go against President Trump's timeline. Dr. Anthony Fauci says he's cautiously optimistic the U.S. will have a vaccine by the end of this year.

Pfizer, the company behind this vaccine, is the only major developer that says it could know before Election Day whether its drug formula is effective for the virus. It says its fast progress has been driven by science. But FDA is demanding strict standards to support the company's data from clinical trials.