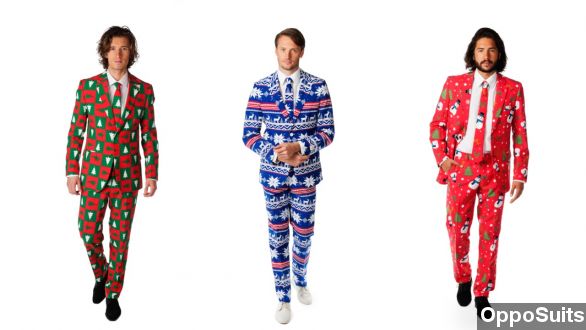 SMS
Top 3 'We Can Finally Celebrate Christmas' Stories
By Katherine Biek
By Katherine Biek
December 5, 2014
This week's top three stories include a teen getting stuck in a chimney, kids calling 911 to talk to Santa Claus and some snazzy Christmas attire.
SHOW TRANSCRIPT

When Thanksgiving dinner ended last week, it seems like everyone couldn't wait to start celebrating Christmas. I mean, seriously, was the turkey off the table before you started putting up your tree? And since Turkey Day is now officially over, people's holiday-themed antics can now appropriately start making the news.

We all know Santa goes down the chimney to deliver presents. But this year, a teenage boy decided to follow suit.

"This is the fire department," the dispatcher says in the 911 call.

"I'm stuck in the chimney," the Arizona teen says.

"You're stuck in the chimney?"

The 13-year-old had been locked outside of his home without his keys.

AZCentral.com reports the teen decided to climb down his home's chimney with the use of an extension cord. But he ended up getting wedged inside and was forced to call 911 for help.

It took firefighters more than an hour to rescue the teen, and KNXV says they eventually had to take the fireplace apart from inside the house. The chimney was too tight to pull the boy up through it.

Besides being a tad embarrassed, the teen is doing just fine. Although "Good Morning America" anchor Robin Roberts did bring up a really good point.

"How did he get cell service in his chimney?"

We'd really like to know who his carrier is because sometimes we can barely get a signal in here. Hello? Hello? I can't hear you.

Next up, sometimes the post office can be really slow. It is called "snail mail" for a reason, guys.

And when the letter's recipient is Santa Claus, it's pretty important to make sure the post office delivers.

So two Wisconsin boys came up with what is, in our opinion, a pretty ingenious plan.

"It was determined a 3-year-old and a 6-year-old had dialed 911 and were attempting to contact Santa Claus," Mayville Police Chief Christopher MacNeil told WITI.

A reporter for The Inquisitr writes, "Calling 911 in this Christmas-list emergency was most likely the obvious thing to do since the young brothers didn't know the direct number to Santa's busy workshop at the North Pole."

"They did get a gift after all: a tour of the police station. Then they were released on good behavior," a Fox News reporter says.

You do have to give credit to those boys for going above and beyond to make sure Santa got their wish lists. We're betting they're getting put on the "nice" list.

And finally, looking for something to wear to those upcoming holiday parties? OppoSuits has an option for you.

The company just rolled out its festive collection of Christmas suits called Treemendous, The Rudolph and Christmaster. All we can say is, wow.

As Business Insider puts it, "Inspired by the patterns of sweaters best left on the racks of Value Village, these suits are just about the most attention-getting piece of clothing that money can buy."

The suits retail for about $110 and are made of 100 percent polyester. Sounds enticing, right?

But plenty of people are buying them. In fact, all three of the Christmas-themed suits were sold out earlier this week after being up on the company's website for just 48 hours.

If these suits aren't really your style, we guess you could always revert back to the ugly Christmas sweater. Or if you're brave, give this a try.

"We're wearing our oversize moose sweaters. Don't be jelly. Don't be a hater," Kelly Ripa said on a recent episode of "Live with Kelly and Michael."

"We got the front, the back. You know what they call this right here? Backing that thing up," Michael Strahan said.

Wear it. We dare you. You'll be the life of the party and will definitely be invited back next year ... probably.