Top 3 Ways To Take Your Halloween Celebration Over The Top 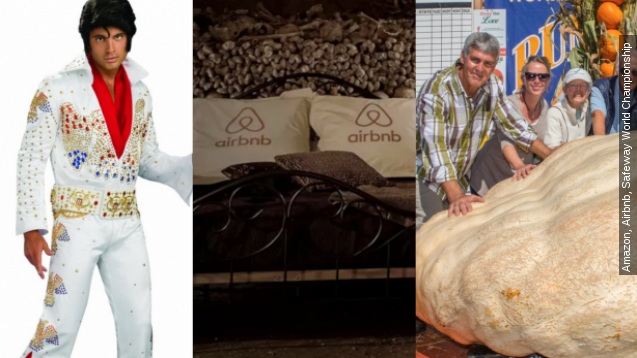 SMS
Top 3 Ways To Take Your Halloween Celebration Over The Top
By Katherine Biek
By Katherine Biek
October 17, 2015
Expensive costumes, carving gigantic jack-o'-lanterns and literally sleeping with the dead are just some ways to take Halloween to the extreme.
SHOW TRANSCRIPT

The spookiest night of the year is almost upon us. There’s exactly two weeks left until Halloween, and we thought why not make this year’s Oct. 31 the most extreme one yet? So we put our skulls together and came up with a few ways to really take this holiday over the top.

First up, it’s not Halloween without a costume. (Video via Party City)

But instead of going for the oh-so-popular sexy fairy tale character or Darth Vader costumes, you could really take your outfit to the next level by forking over quite a bit of money.

What about this "Elvis Aloha From Hawaii Costume"? It's only about $2,000 on Amazon.