Top 3 Ways Fox Could Take Its 'Grease: Live' Production Over The Top 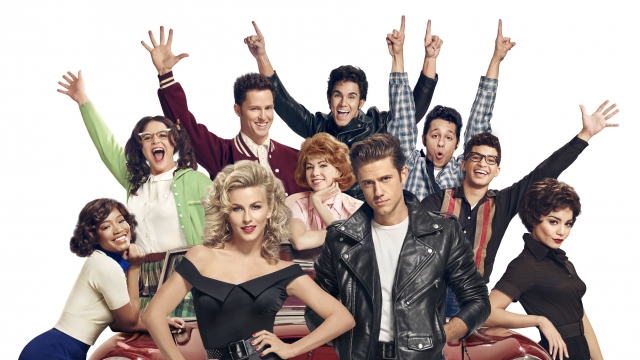 SMS
Top 3 Ways Fox Could Take Its 'Grease: Live' Production Over The Top
By Katherine Biek
By Katherine Biek
January 30, 2016
Fox might weave these scenarios into "Grease: Live." At the least, they'd help distinguish the live musical from the 1978 movie.
SHOW TRANSCRIPT

We've got chills that are multiplying in anticipation of Fox's live musical production of "Grease" airing this Sunday. And while we're hopelessly devoted to the summer lovin' that played out on screen in the original 1978 movie starring John Travolta and Olivia Newton-John, there are a few changes we're suggesting that would really make Fox's event one of a kind. After all, nothing goes better with a live television event than the element of surprise.

She grew up ballroom and Latin dancing and became a household name after winning seasons four and five of ABC's "Dancing with the Stars" and starring in a remake of the '80s classic "Footloose." (Video via Warner Bros. Television / "The Ellen Show")

So what if Hough decided to break from the predetermined choreography for the Rydell High School dance scene and do the tango instead? Or the salsa? Or even the dreaded quickstep? (Video via Paramount Pictures / "Grease")

Even better — Carlos PenaVega, who plays Kenickie in Fox's version, just competed on the most recent season of "Dancing with the Stars" and placed fourth.

So maybe PenaVega could dance and Hough could give him a score out of 10, just like she does as a judge on the reality show.

Next, Fox cast Aaron Tveit as Danny Zuko, and he has some serious musical credits to his name.

Not only did he have a supporting role in the 2012 movie adaptation of "Les Misérables," but he's also played lead roles in Broadway productions of "Hairspray" and "Wicked."

So what if on Sunday night, Tveit just happened to forget the words to one of his songs? It'd probably be systematic — perhaps even hydromatic and ultramatic — to just burst out into a song he already knows.

We aren't quite sure "You Can't Stop the Beat" from "Hairspray" would add to "Grease"'s story, but it'll definitely give the critics something to say Monday. Let's just hope they don't brand Tveit a fool.

And finally, on Sunday night, the stars will be shining bright up in the skies above two actresses who've each played the same role.

Carly Rae Jepsen, who's playing Frenchie, starred as Cinderella in the Broadway production of Rodgers and Hammerstein's classic tale for a a few months in 2014.

After Jepsen's run, Keke Palmer, who's playing Marty, took over and became the first-ever African American woman to star as Cinderella on Broadway.

So what if the two had a Cinderella-off right there on stage Sunday night? Surely, running around in some glass slippers would add a lot of character depth to these Pink Ladies. (Video via Walt Disney Studios / "Cinderella")

This video includes images from Fox and Getty Images.