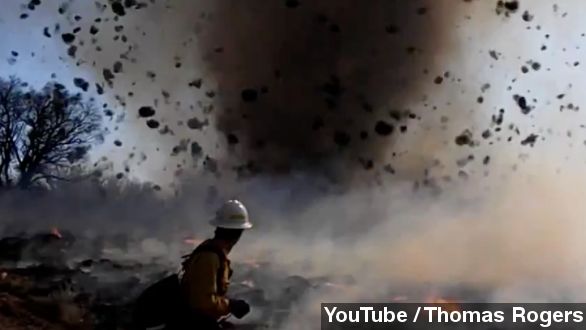 By Candice Aviles
March 28, 2014
This week's top 3 unbelievable caught on camera moments include a chain reaction car crash, a train crash and what looks like a fire tornado.
SHOW TRANSCRIPT

Some unbelievable things happened this week. And they were all caught on camera. We saw a chain reaction car crash, a train crash and what looks like a fire tornado. We’ll explain when we get there.

We all know people slow down to look at a car accident as they pass by. But in this case, one crash led to another, and another… (Via KMAX)

Emergency responders were able to manage the situation because they were already on the scene. Eyes on the road, hands on the wheel, everybody.

Our No. 2 unbelievable caught on camera moment is when a Chicago subway train crashed and actually started going up the escalator at O’Hare Airport. (Via ABC)

"The driver fell asleep, but two backup systems should have stopped the train. That's what the NTSB said. ...The NTSB says an alarm set off two emergency brakes. It's not clear why they didn't stop the train in time.​" (Via KSHB)

The crash happened around 3 a.m. and thankfully no one was seriously injured. (Via CNN)

When it comes to severe weather you might think tornadoes, hurricanes and fires. If you combine two of those, you get our No. 1 unbelievable caught-on-camera moment. A firenado.

There’s no stopping a firenado. This thing’s been going strong on YouTube now for more than a week.  Luckily, the firefighters made it out unscathed. You can always count on Mother Nature for a good viral video. (Via YouTube / Thomas Rogers)

Thanks for checking out our Top 3 unbelievable Caught On Camera Moments. We’ll see you next week.