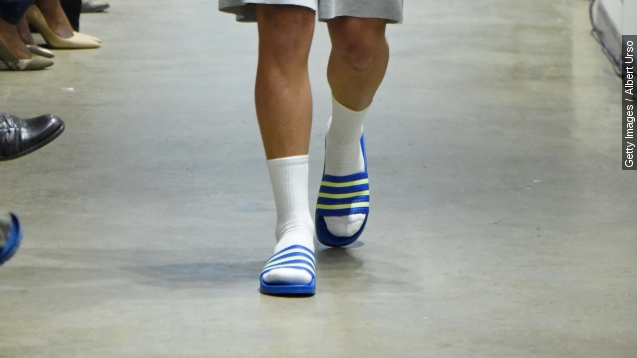 We're taking a look at trends that became popular for men over the summer: socks and sandals, jumpsuits and that infamous dad bod.

Summer is almost officially over, and as we looked back over news stories from the last few months, we noticed there were quite a few trends for men that became popular. Now, whether these trends are good or less than tasteful remains to be seen.

First up: socks with sandals.

This interesting choice of fashion is no longer just for high school athletes — it's actually made its way onto runways in Milan and New York.

It seems to be a polarizing trend.

The Wall Street Journal spoke to one stylist who loved the idea, while a columnist for GQ told the publication, "The inherent idea of sandals is that your feet are going to be exposed. To do that and then cover it with socks, you look confused."

At least one company is hoping to profit from the socks-and-sandals thing: Footwear designer Teva have started selling a pair of socks with their sandals. It's also asked stylists the best way customers can wear this trend.

The next trend gaining popularity is the jumpsuit.

While many probably thought this was only a look for women, clothing lines like Mr. Turk are proving men can rock the look as well.

Fashion stylist Joe Zee is not jumping on board, though.

"Would you want the men in your life to be wearing this?" Zee asked an ABC reporter.

"Some things are better off for the ladies," Zee said.

And finally, we could not get through a story about some popular trends for men without discussing that whole dad bod craze.

Earlier this summer, researchers at Northwestern University discovered men ended up gaining an average of 3.5 to 4.5 pounds after becoming fathers.

According to one Clemson University student, having a dad bod — even if you aren't a father — isn't necessarily a bad thing. She pointed out women feel that physique isn't intimidating and that it makes men better cuddlers, writing "No one wants to cuddle with a rock. Or Edward Cullen. The end."