Top 3 The-Bigger-The-Better Stories From This Week 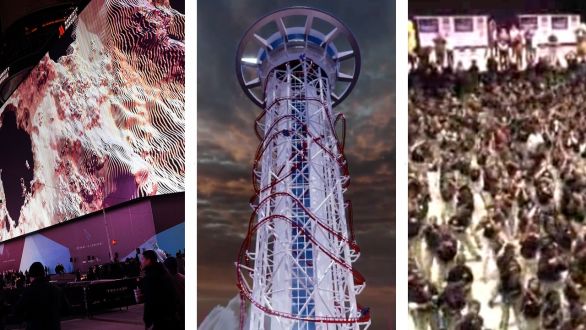 By Katherine Biek
November 21, 2014
This week's we look at stories about the largest billboard in North America, the soon-to-be tallest roller coaster and the largest hip-hop dance.
SHOW TRANSCRIPT

It seems like everywhere you look nowadays, someone is trying to set a new record for the largest something in the world. So we decided to highlight three of those “somethings” this week.

First up, we’ve got the largest billboard in North America.

The 25,000 square foot billboard can be found in Times Square in New York City.

And paying to utilize the billboard, which actually wraps around the sides of the Marriott Marquis hotel, comes with a hefty price tag.

“Businesses will pay about $2.5 million a month to get their ads seen by thousands of New Yorkers and tourists,” CBS anchor Nora O’Donnell said.

That also makes it the most expensive billboard in the city.

The New York Times reports starting Monday, Google will begin running ads on the billboard, which will be on display into the new year.

Can you imagine being displayed on a screen that big?

I don’t think anyone wants to see our faces that close up.

Next, we’ve got what plans to be the tallest rollercoaster in the world. This video of what the Orlando, Florida coaster will look like when its built was just released by the developer.

According to Gawker, the roller coaster, which is appropriately called The Skyscraper, will be an outstanding 535 feet tall when it’s completed in 2017.

“It features loops, dives, spirals. Hold onto your lunch. Look at that! Whoo!” a WINK anchor said.

The president of US Thrill Rides told the Orlando Sentinel, “There’s no ‘down time’ on this four-minute coaster experience. It is an absolute cutting-edge engineering marvel that will deliver pure adrenaline unlike any roller coaster in the world today.”

We'll have to pay a visit when it opens up.

So now isn’t the best time to tell you I’m scared of heights.

Eh, we’ve got three years for you to conquer that fear.

And finally, about 2,000 elementary school students in Alabama came together to perform in what’s now the world’s largest hip-hop dance party. Look at all of them!

They are pretty adorable. According to the school district’s website, kids as young as five years old participated.

The Dothan Eagle reported the children practiced the five-minute routine for eight weeks before performing it on Wednesday.

These kids are totally making us want to dance. But we won’t. We promised ourselves that we wouldn’t get out of these chairs and start doing some hip-hop moves. Because we’ve already danced before. And, there’s the fact that we don’t really know how to hip-hop dance.