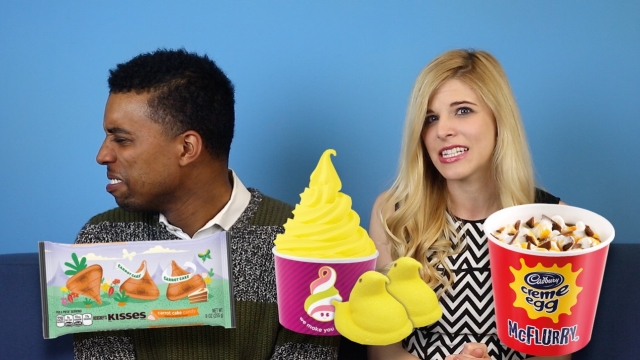 SMS
Top 3 Sweet Treats That Would Make Even The Easter Bunny Cringe
By Katherine Biek
By Katherine Biek
March 5, 2016
Weird Easter-themed treats are on the way, and we got a stomachache just looking at them.
SHOW TRANSCRIPT

Companies have been releasing a whole lot of Easter-themed treats recently. And while some are as sweet as the copious amounts of sugar they're filled with, a few would make even the Easter Bunny cringe.

The marshmallow company has joined forces with Menchie's, a frozen yogurt chain, to come up with this strange yellow-chick concoction.

We weren't able to find any reviews for the Peeps-flavored frozen yogurt, but USA Today reports the company produces 5.5 million marshmallows every day — so there must be a market for this dessert somewhere in the world.

Next, is the carrot cake-flavored Hershey's Kisses.

And while some might be hoping a few of those Kisses count as a serving of their daily vegetables, think again.

Which actually sounded pretty yummy, until Time reported a single serving of it contains 56 grams of sugar. In case you're wondering, the World Health Organization recommends that a grown adult consume only 25 grams each day.

So you could take a walk on the wild side and try one of these — er — interesting Easter-themed desserts, or you could just take a bite out of actor Benedict Cumberbatch instead.

Chocolatician in the U.K. is selling its version of the chocolate bunny, affectionately called the "Cumberbunny." The celebrity bunny will set you back only about $70.