Top 3 Stories That Remind Us Of Childhood 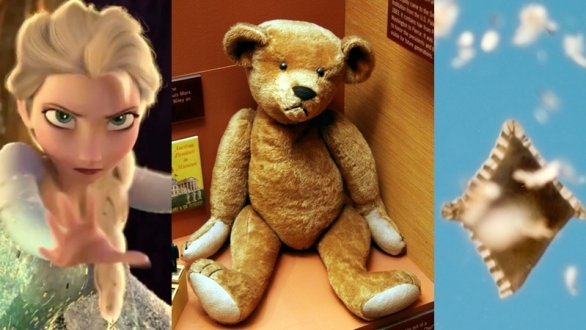 If you're spending this Thanksgiving holiday with your family, you're probably up to here with reminders of your childhood. I mean, there are only so many times we can look at baby photos before it gets uncomfortable. Mom, we're talking to you. But here are some more of those reminders for you.

First up, move over, Barbie. There's a new girl … um, girls … in the pink aisle.

"For the first time in a decade, she's not the most popular girl — girl's toy — of this holiday season. This year, that honor goes to the stars of Disney's blockbuster movie 'Frozen,'" ABC anchor Lara Spencer says.

One in five parents plan to buy their daughters something "Frozen"-related, according to a survey from the National Retail Federation.

And boy, are there a lot of options. Just a peek at the Toys R Us website shows more than 200 "Frozen"-themed dolls, games, singalong DVDs and dress-up clothes.

It makes sense, though. "Frozen" became the highest-grossing animated movie of all time when it earned over $873 million at the box office worldwide. (Video via Walt Disney Pictures / "Frozen")

Other top toys for girls include American Girl dolls and My Little Pony, while Legos and Teenage Mutant Ninja Turtles ranked high for boys.

We're thinking the little ones in your family will enjoy whatever you end up getting them for the holidays. As long as it comes from the toy aisle.

Next up, the majority of us had that stuffed animal when we were little that we just couldn't go anywhere without.

And heaven forbid if you ever lost it, right? The world would come crashing down. Well, now a British train company wants to reunite some children with their lost, fluffy loved ones.

First Great Western set up what it's calling the "Teddy Rescue." It uploads adorable mug shots of stuffed animals found on its trains, along with the date the animals were found.

Coincidentally, the "Teddy Rescue" comes along at the same time the motion picture about the literary character Paddington Bear hits theaters in the U.K. It's the story of a bear who's found by a family in a London railway station.

But a spokesperson for the train company told NBC there's no partnership between the "Teddy Rescue" and the film.

If you recognize any of the stuffed animals in the mug shots on First Great Western's website, it asks that you email them so it can return the cuddly toy to you.

The pillow fight was put on in celebration of the economy hotel chain Super 8's 40th anniversary. It was held in South Dakota because that's where the very first Super 8 opened back in 1974.

That one extra person was specifically needed to break the previous Guinness World Record for the largest pillow fight that occurred between 4,200 people at UC Irvine in October.

I, for one, am just happy that we're now old enough to not engage in such childish silliness and that there's no pillows in the office for you to hit me —

This video includes images from Getty Images and Thomas Hawk / CC BY NC 2.0.