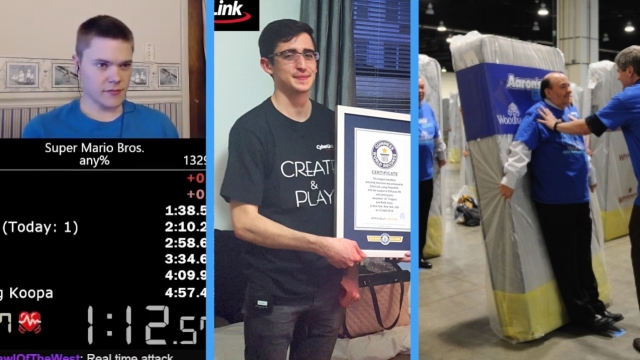 SMS
Top 3 Records Set This Week (Besides That One The Warriors Broke)
By Katherine Biek
By Katherine Biek
April 16, 2016
It was big news when the Golden State Warriors won the most games in an NBA season, but some strange less-publicized records were also set this week.
SHOW TRANSCRIPT

All eyes were on the Golden State Warriors this week when the team snagged the most wins in an NBA season. But there were plenty of other new records making news that were a little more bizarre.

Like one for the largest human-mattress domino chain set by 1,200 people in Maryland.

In what is essentially the biggest trust-fall exercise ever, employees for Aaron's held onto mattresses as they fell backward like dominoes.

There were so many people involved, the record had to be attempted at a nearby conference center, and it took a total of 13 minutes and 38 seconds for all 1,200 people to fall over.

And if you're slightly concerned your new Aaron's mattress might've been used in this record-setting feat, don't worry. The company donated the mattresses to centers for homeless kids.

Next, a man set the record for the longest time spent binge-watching television.

The record-setting attempt was sponsored by CyberLink, a software company, which reported the binge-watching winner suffered an elevated heart rate after the 94 hours, as well as some neurological side-effects, like hallucinations.

And finally, there's a new record for the fastest speed run of "Super Mario Bros."

A man known as Darbian managed to get through the Nintendo game in about 4 minutes and 57 seconds. He beat the previous record-holder — himself — by milliseconds.

The champ, who's a software engineer, told Kotaku he's been practicing for months to shave off those milliseconds.