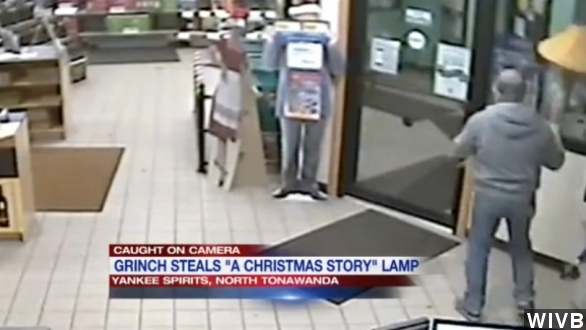 SMS
Top 3 People Who Behaved Badly This Christmas Season
By Katherine Biek
By Katherine Biek
December 26, 2014
The holiday season didn't stop people from behaving badly, like a man who got kicked off a flight after he was told "Merry Christmas."
SHOW TRANSCRIPT

The holiday season is supposed to be filled with good tidings and cheer, but there are always those few people who end up on Santa's naughty list. Like that man who got kicked off a flight or the unknown thief who stole the baby Jesus from a nativity scene. We're thinking these people all got coal in their stockings this Christmas.

First, we have a passenger who got kicked off an American Airlines flight at La Guardia Airport in New York on Tuesday.

The New York Post reported the man first got upset when the gate attendant welcomed him with a "Merry Christmas" while checking his boarding pass. How rude of her. The man reportedly told the attendant, "You shouldn't say that because not everyone celebrates Christmas."

"Then once on the plane, a flight attendant wished him a 'Merry Christmas.' That's when he lost it. Again, we don't know why, but he threw a fit," said a WPIX anchor.

The man's behavior was so poor, a writer for Gothamist called him "Ebenezer 2.0."

And it sounds like no one else on that flight wanted to risk getting sat next to such a Grinch since the passenger was escorted off the plane amid a round of applause.

Next up, the nativity scene near the capitol building in Washington state is missing a pretty important piece.

"The baby Jesus. A holiday thief snatched away the figure earlier this week," a KREM anchor reported.

Fox News reports this is the third time the Jesus figurine has been stolen in the three years the nativity scene has been placed on the lawn of the legislative building. Currently, a baby doll is residing in its place.

The News Tribune says local police are on the lookout for the thief. A Washington State Patrol spokesman said, "Obviously an item from a display — it doesn't have [a] serial number, it doesn't have a tracking chip. We completely get that this is going to be a difficult case to solve."

And it seems like this thief is just following in the footsteps of many before him: there have been reports all month long about baby Jesuses being stolen from nativity scenes across the country.

And finally, a man was caught on camera stealing a leg lamp from a liquor store in North Tonawanda, New York.

And if that leg lamp looks familiar it's because it plays a pretty prominent role in the 1983 film "A Christmas Story."

WIVB reports the store's owner puts out "A Christmas Story" themed display every year in a window.

But it turns out these leg lamps are a pretty popular item to come by.

A website dedicated to the movie even sells an exact replica of the leg lamp from the film for around $250. Better start saving up your money if you're interested.

Here's to hoping you all behaved quite a bit better this Christmas than these three did.

This video contains images from Getty Images and Harvey Barrison / CC BY SA 2.0.