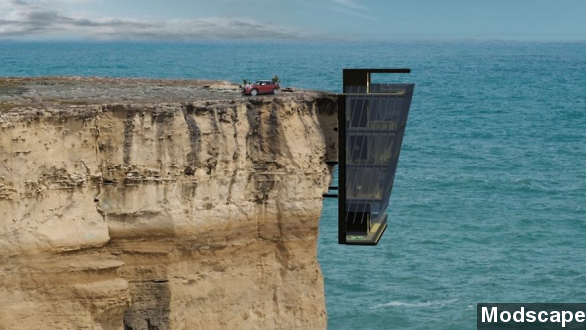 This week we're focusing on real estate, including plans for a home on a cliff, a $1 million parking spot and the priciest house on the U.S. market.

This week there was a lot of real estate news popping up. We're talking about a house on the market for more than $100 million and a builder who took one home to the extreme.

First up, though, is a parking space. We know it's not what traditionally comes to mind when we say "real estate," but owning a parking spot in New York City might be just as important as owning an apartment.

AMY ROBACH FOR ABC: "A luxury condo building under development in the SoHo neighborhood is selling a single parking space for $1 million. Wow!"

We agree with ABC's Amy Robach — $1 million does seem a bit steep.

Especially since The New York Times reported this means the 10 available parking spaces end up costing anywhere between $5,000 to $6,666 per square foot, depending on their size.

Here's a reason for the extreme price of these parking spaces.

New York City's government discovered the number of parking spots in the city has actually declined over the years, as parking garages and lots have been torn down to build other things. It found in 1978 there were 127,000 public parking spots. That number had reduced to 102,000 by 2010.

Maybe that's why you probably shouldn't drive while in the city. Walking and taking taxis — or even the subway — is just so much easier.

Next up, we've got a house that was created for a person who really doesn't mind heights.

Yes, this house in Australia really is designed to be built on the edge of a cliff.

It's not built yet, but the architectural firm Modscape wrote on its website that the house was "inspired by the way barnacles cling to the hull of a ship."

Not typically what we think of when looking for a house, but we'll go with it. The house is designed to have five levels with three bedrooms, a barbecue area and a garage on top.

Although the design is definitely neat looking, we agree with a writer for Business Insider who called the it "the scariest house ever."

If the house is ever built, we want some photos ... but we'll probably send someone else to take them. We're going to keep our feet planted firmly on the ground.

We've saved the best — or at least the most expensive — for last. And as Curbed points out, it's currently on the market.

WSVN: "Take a good look because for the majority of us, that's as close as we’ll ever get."

That thing is enormous. We're not sure we can even call it a house! Which is OK, since it's being called Le Palais Royal, which means "the royal palace" in French.

According to the property listing on Coldwell Banker, this Florida mansion is being listed for $139 million.

CBS: "At more than 60,000 square feet, the house boasts 11 bedrooms and 17 bathrooms, because, you know, you never have enough bathrooms."

Le Palais Royal also features an Imax theater, an infinity pool and a 30-car underground garage. Whoever becomes the lucky man or woman to purchase the home — just know that we'll be waiting for our housewarming invitations to arrive in the mail.