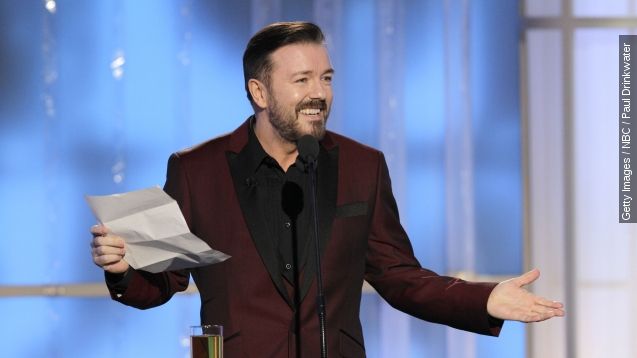 Hollywood awards season officially kicks off tomorrow with the Golden Globes. And instead of talking about what we want to see happen or what we're worried might actually happen — hint, we already did that for last year's VMA, and all three things came true — we decided to talk about a few numbers we'll need to keep in mind when we're in our sweatpants, sitting on our couches and judging all the nominees Sunday evening.

First is 437. That's how many feet the red carpet stretches.

To put that in some perspective, a football field is only 360 feet long, even when you include both end zones.

Thankfully there's no rain in the forecast for Los Angeles on Sunday, but celebrities have had to strike a pose on the Golden Globes carpet in the rain once before in 2010.

Next, while water is available, the drink choice of the night is undoubtedly champagne.

In 2012, the Hollywood Foreign Press Association announced more than 9,000 glasses of champagne were going to be served.

And since this is the 25th anniversary of Moet & Chandon being the official champagne of the awards show, don't be too surprised if this year's drinking is kicked up a notch.

In celebration, the company donated more than 1,500 mini-bottles for the red carpet and 125 cases of magnums for the tables inside the event.

And the final number to keep in mind: one. That's how many days the Golden Globes producers get to review host Ricky Gervais' jokes for the telecast. (Video via Warner Bros. Television Distribution / "The Ellen DeGeneres Show")

Still, the CEO of Dick Clark Productions told The Hollywood Reporter, "Our hosts are all unbelievably good at improv, so even to the extent we think we've seen it, it can still change at a moment's notice."

And perhaps we should be a tad worried just based on this apology the comedian, who will be hosting for the fourth time Sunday, issued on Twitter: "Because I can see the future, I'd like to apologise now for the things I said at next Week's Golden Globes. I was drunk."

"I can't be bothered to apologize after. Just because you're offended doesn't mean you're right. I don't care," Gervais told NBC's Matt Lauer.

"Do you not care?" Lauer asked.