Top 3 Mischievous Animals Of The Week 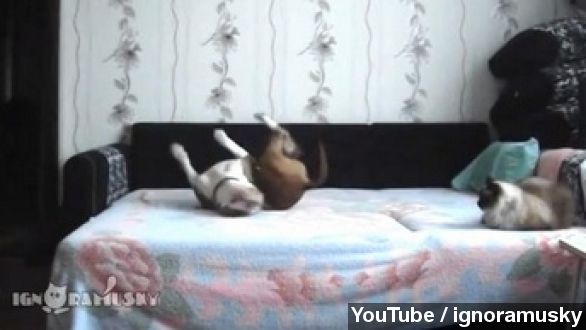 By Candice Aviles
March 22, 2014
This week's top 3 mischievous animals include a dog on a cliff, a walrus working out and a sneaky dog caught somewhere he shouldn't be.
SHOW TRANSCRIPT

Our top 3 mischievous animals of the week all involve the crazy creatures being somewhere they shouldn’t be or doing something pretty wacky.

Coming in at No. 3 is a dramatic rescue to save a dog.

“A black-and-white dog named Oreo got herself stuck on a 90-foot cliff and couldn’t figure out how to get down.” (Via USA Today)

We’re not sure how Oreo got there in the first place but a brave sheriff’s deputy rescued her after hanging from a helicopter. (Via YouTube / FriendsOfHenry1)

Thankfully, Oreo has been safely reunited with her owner. Hopefully she’ll avoid scaling cliffs in the future.

Our No. 2 pick goes to a clever walrus who ABC says took some time to workout with San Francisco 49ers coach Jim Harbaugh. Take a look.

I’m pretty sure the walrus can do pushups better than I can. A writer for SB Nation sums up the video perfectly calling it awesome.

Ever wonder what your pets do when you’re not home? Especially if they’re not allowed in certain areas of the house? Well one pup who’s not allowed on the bed took full advantage of his owner being gone.

The dog goes on for more than a minute rolling around in bliss and only stops a few times to see if anyone coming. KTTV says the dog’s owner was curious what it did alone, so installed the camera.

The takeaway here? If you’re going to break the rules, you might as well enjoy every second of it. Thanks for watching our top 3 mischievous animal picks, we’ll see you next week.