Top 3 'Holidays' You Should Have Celebrated This Week 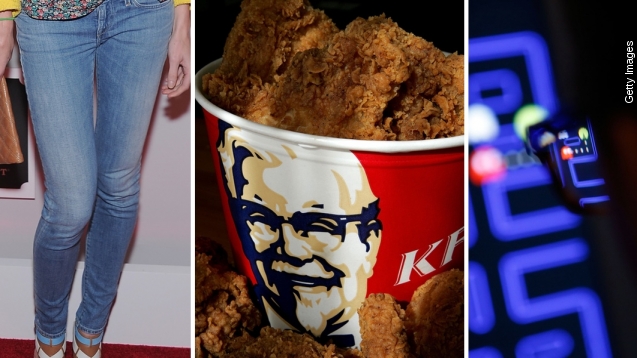 We always look forward to holiday weekends right? Time off from work, getting the chance to relax, spending time with family... But we learned that oftentimes you don't have to wait for the big holidays to celebrate. You can celebrate the random things. The really, really random things.

Like Kentucky Fried Chicken. It's the 75th anniversary of KFC's original recipe.

"This is the type of chicken your mom would make ... if she knew the combination to the vault in Kentucky where we keep Colonel Sanders' secret recipe."

And to really promote the fact that people around the world have been eating fried chicken for way too long, KFC decided to bring back its famous Colonel.

SNL alum Darrell Hammond is stepping into the shoes of the iconic fast-food leader.

Next blue jeans celebrated its 142nd birthday this week. (Video via Levi's)

Time reported that back on May 20, 1873, Levi Strauss and Jacob Davis received their patent for their jean design.

Blue jeans quickly became one of the best-selling clothing items in the U.S. and CNN reported Americans now "buy approximately 450 million pairs of jeans every year."

And finally, Pac-Man, the favorite arcade game of many, turned 35 years old.

The achievement was celebrated in two very different ways.

First, Sony released a new clip from the movie "Pixels," which debuts later this summer.

"Pac-Man is faster than I remember,"

"Pac-Man's always been faster than the ghost. We're gonna have to outmaneuver."

And in Tokyo, 351 people gathered to create the largest human image of Pac-Man. At 10.5 meters in diameter, that living image is the new Guinness World Record holder.

If you did remember to take a moment and celebrate these "holidays" earlier in the week, good for you. But if you're like us, and totally forgot, it's probably not too late to celebrate with some cake.

This video includes images from Getty Images and music by Pierlo / CC BY 3.0.