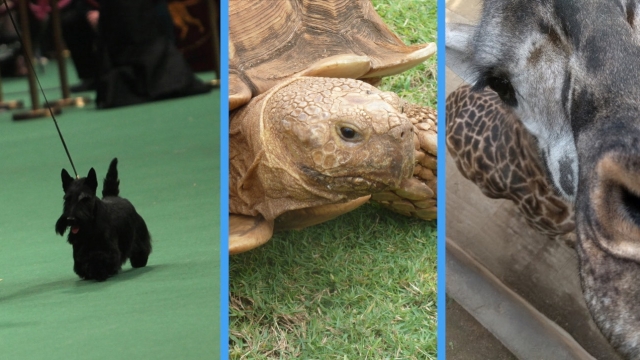 SMS
Top 3 Hilarious Animal Stories From This Week That'll Make You Laugh
By Katherine Biek
By Katherine Biek
March 12, 2016
This week's Top 3 takes a look at zoo animal selfies, a job posting for a tortoise walker and Scotland's next pooch ambassador.
SHOW TRANSCRIPT

Some weeks there are those news stories that just make you laugh. And sometimes — OK, a lot of the time — those stories involve animals. That was the case this week.

First, some animals at the Los Angeles Zoo just want to make sure the camera got their good side. Is that too much to ask?

Google partnered with the zoo and ended up placing cameras with motion sensors inside the animal enclosures. So when animals, like these giraffes, got close enough, they had their picture snapped.

But the zoo's blog said a few of the cameras were destroyed in the process. Oops.

Apparently, CJ the Tiger, who's almost 3 years old, wasn't thrilled about the experiment. But since that age means he's "a teenager in the tiger world," we can't hold it against him. Being a teen is hard enough without having a camera document your life.

The photo experiment was promoting Disney's "Zootopia," which is currently in theaters. Turns out animated animals are pretty skilled at taking selfies, too.

Next, we've definitely heard of dog walkers. But a tortoise walker is a new one.

An ad popped up on Craigslist earlier this week; a New York City woman was looking for someone to walk her 16-year-old African tortoise named Henry. That person would have to take Henry to Central Park in his stroller and supervise him while he gets his exercise.

Like any pet, Henry is extremely important to his owner, Amanda.

She told Refinery29, "I think of life now as Before Henry and After Henry, B.H. and A.H."

The ad has since been removed from Craigslist, so unfortunately we're not sure if anyone ever took Amanda up on her $10-an-hour offer.

And finally, Scotland's tourism board is looking for an ambassador.

More specifically, a dog ambassador — or an "Ambassadog."

According to the job posting, the winning dog and its owner will represent Scotland at a variety of events as global ambassadors. To apply, owners need to send in a 500-word essay on why their pooch should be chosen. They'll get brownie points for including information about their Scottish travel history.

The chief executive of the recruiting agency told The National: "The successful candidog will have good banter, unwavering enthusiasm and relish the opportunity to tour the country. Good manners are a bonus."