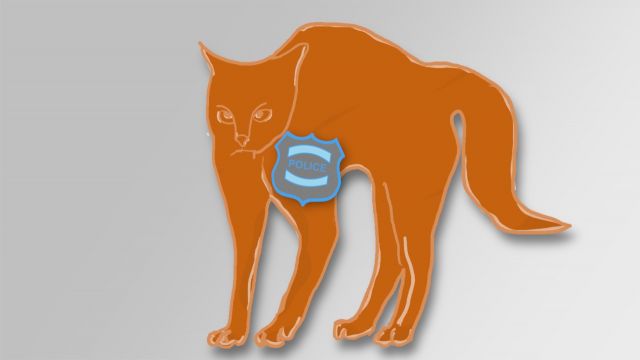 This week's weird cat stories include a cat that survived being shipped in the mail, a study of cat accents and a police force recruiting cats.

Cats. Everyone pretty much loves them — if the Internet is any indication. But cuteness aside, there were some cat-related stories this week you could say were pretty bizarre.

First, the owner of a Siamese cat named Cupcake accidentally shipped her off in a package along with some DVDs.

Somehow, the cat must have climbed into the box, and the owner didn't bother to check the package before she sent it off.

Now, Cupcake was in the box for eight days. Thankfully, vets said she was in good health after she was treated for dehydration. Cupcake has since been reunited with her owner.

Next, we all know cats "meow," but a group of researchers in Sweden are seeing if our feline friends actually speak in different accents.

"I've found out that my cats — they have a different melody in their meows when they are sad than when they are happy or hungry," researcher Susanne Schötz said.

The Lund University researchers are looking at several things, including if anything affects cats' speech, like where a feline is from or how humans talk to them.

Cat vocalizations have been studied for decades. According to The Guardian, a psychologist discovered 16 different sounds cats made when either communicating with a human or another feline.

And finally, police dogs are a pretty well-known thing, but a police cat is a new one.

Five-year-old Eliza Adamson-Hopper wrote a letter to local officers saying cats are perfect crime-fighting partners because they could help rescue people from trees, listen for danger and find their way home.

The chief constable wrote Eliza back saying he was passing along her idea to the inspector in charge of the animals.

The inspector told The Northern Echo: "I can confirm the force is looking into recruiting what we believe to be the first U.K. police cat. Their duties and responsibilities have not yet been agreed, but if nothing else, they will become the force mascot."

Come April Fools' Day, that police office couldn't help itself and posted on Twitter it'll also be deploying "police bears," adding the "animals are equipped with more than the 'bear' necessities to cope with police work and are adept at covert ops and grizzly crime scenes."

This video includes images from Getty Images and clips from BBC.