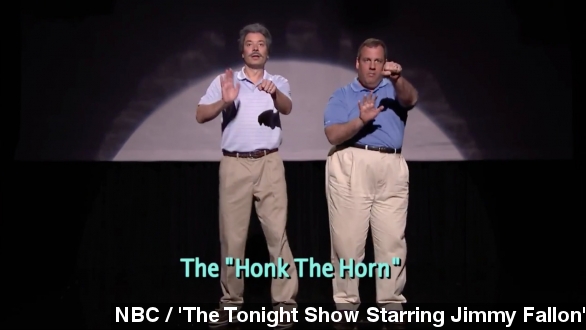 By Katherine Biek
June 13, 2014
It's time to celebrate the caring father figures in our lives. In honor of the holiday, we've selected our favorite Father's Day stories of the week.
SHOW TRANSCRIPT

It's that time of year again when we celebrate those very special men in our lives: our dads. We've been honoring our dads since 1972, and we're not about to stop the tradition now. Without further ado, let's get to our top three Father's Day stories of the week.

First up we have a set of very special twins who have been in the hospital ever since they were born in Akron, Ohio May 9. (Via WCPO)

Delivered at just 33 weeks, Jillian and Jenna Thistlewaite were born holding hands, according to WEWS.

"The moment — something Sarah never could have imagined when she agreed to allow us in the delivery room."

And the girls' father, Bill Thistlewaite, couldn't keep the tears out of his eyes, according to KDVR.

"What was going through my mind ... I don't know. I was just tearing up immediately. It was beautiful."

The world knows little Jillian and Jenna as the "mono-mono twins," which means they shared the same placenta and amniotic sac. (Via WebMD)

As the Akron Beacon Journal reports, exactly 30 days after their birth, the twins were finally allowed to go home — just in time to celebrate Father's Day.

We're guessing having his daughters home along with his 15-year-old son is making Bill a pretty happy guy.

On Sept. 11, 2001, Mack and his best friend Vinnie Halloran were just two of the thousands of firefighters who went to battle the blazes at the World Trade Center. Sadly, Vinnie lost his life that day, leaving behind his pregnant wife and five children.

Mack stepped up and raised his best friend's children as if they were his own, even bringing them along on family camping trips and going to New York Jets games. (Via ABC)

Now almost 13 years later, "GMA" gathered the six Halloran children along with Mack's two biological children so they could share just how much they love their dad.

"He, if I could describe him, is the best dad ever."

"He himself is the gift."

"He never had to do all those things he did." (Via ABC)

And the surprise didn't end there. ESPN reports a huge party was thrown at the firehouse in Mack's honor. Former Jets wide receiver Wayne Chrebet even made an appearance and gifted Mack with tickets so he and his family could see a game.

A writer for People said, "Both fathers themselves, the pair had no trouble tapping into the cache of embarrassing steps all dads seem to know."

Yeah, they pretty much nailed it.

And because we're sure everyone will be posting photos of themselves with their dads all weekend, we decided it was only fitting that we do the same.

To all the dads out there, we hope your kids spoil you rotten this weekend. You deserve it! Happy Father's Day!