Top 3 Discoveries That Got Us Excited This Week 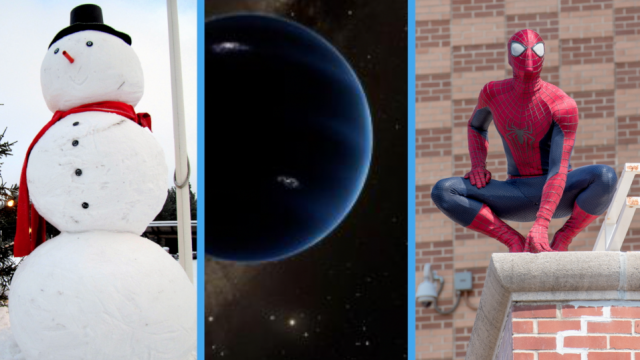 SMS
Top 3 Discoveries That Got Us Excited This Week
By Katherine Biek
By Katherine Biek
January 23, 2016
From discovering a possible new planet to learning how to build the perfect snowman, there were some exciting finds made this week.
SHOW TRANSCRIPT

This week yielded a lot of exciting discoveries. From being able to climb walls to discovering another planet in our solar system, these three findings all proved that scientific revelations can be just as thrilling as they are educational.

First up: a finding that's especially sweet for anyone suffering from the bitter cold this time of year. A U.K. mathematician has determined the exact steps needed to build the perfect snowman.

USA Today reports some pretty intense math equations were involved, but James Hind was able to determine that the ultimate snowman would be 5 feet 3 inches tall, be made of three balls of snow, have a carrot nose, have both arms and legs, and be outfitted in a scarf, gloves and a hat.

Hind tested his equation out on some well-known fictional snowmen and found Jack Frost from the 1998 film of the same name is as close to perfect as they come. (Video via Warner Bros. /"Jack Frost")

While Olaf from Disney's "Frozen" is the worst.

Next up: Scientists believe there might be a new planet beyond Neptune. (Video via NASA)

We say "believe" because the planet hasn't actually been observed yet. Instead, two scientists from the California Institute of Technology used computer simulations to determine there might be a planet in that part of outer space.

Now, if you've been keeping track, this would end up being the ninth planet, which is why for the moment it's being called Planet Nine.

If this new ninth planet does turn out to be the real deal, the scientists believe it has a mass 10 times greater than that of Earth. (Video via NASA)

And finally, anyone who had childhood dreams of climbing tall buildings like Spider-Man — or maybe grown up ones as well; we won't discriminate — has had those hopes crushed this week. (Video via Columbia Pictures /"The Amazing Spider-Man")

A study published in the Proceedings of the National Academy of Sciences found geckos are the largest animals that have the ability to climb walls.

In a press release, one of the study's authors wrote, "If a human, for example, wanted to climb up a wall the way a gecko does, we'd need impractically large sticky feet — and shoes in European size 145 or US size 114."

The average shoe size for men is a 10.5, and for women it's a size 8. And according to Guinness World Records, the person with the largest feet still wears only a size 26.