Top 3 Caught-On-Camera Reactions Of The Week 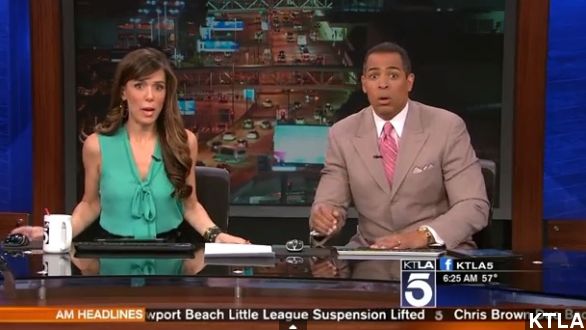 Our top three caught-on-camera picks this week all center around priceless reactions. Whether it's a little luck, attitude or flat-out shock … get ready.

Our No. 3 choice goes to a "Wheel of Fortune" contestant who, as Deadspin points out, defied all odds. The contestant only had two letters to help solve the phrase and somehow guessed it correctly on his first try.

Sometimes people go to the extreme to protect their sources for a story or tip. In this case, it was retired police chief Richard Masten who locked up source information and threw away the key, so to speak. He shocked everyone when he took a paper with the source's name on it — and ate it!

That gutsy move literally changed Masten's view. He was ordered to spend up to two weeks in jail for contempt of court. (Via CBS)

Our No. 1 caught-on-camera pick goes to the official Shamrock shake. An earthquake in LA had every morning show shaking on St. Paddy's Day. But KTLA anchor Chris Schauble's reaction was absolutely priceless. (Via KTTV, KABC, KCBS)

"Coming up, more problems for a troubled — "

"Earthquake. We're having an earthquake." (Via KTLA)

Schauble's response quickly went viral, but he poked fun at himself afterward, making that unforgettable reaction his new Twitter avatar. (Via Twitter / @ChrisKTLA)

They don't teach you how to do that in anchor school.