Top 3 Caught-On-Camera Moments Of The Week 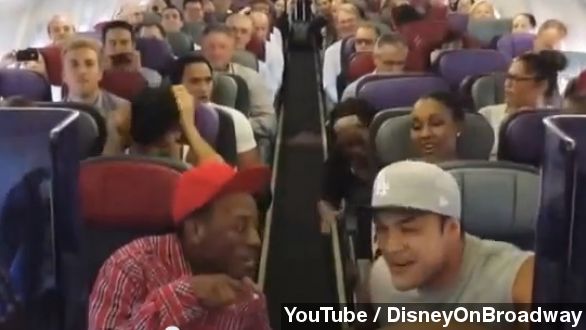 By Candice Aviles
April 2, 2014
This week's top 3 caught-on-camera moments involve mother nature, an anchor who thinks outside the box and a flash mob on an airplane.
SHOW TRANSCRIPT

You have see ‘em to believe this week’s top 3 caught on camera moments. We have a mixture of mother nature, an anchor who thought outside the box and an impromptu performance that will give you chills — in a good way.

Nabbing our No. 3 spot is mother nature being both awesome and terrifying at the same time. Express reports a plane on its way to the United Kingdom from Amsterdam was hit by lightning three times, and it was all caught on camera. (Via YouTube / Brandy NewsHD)

Birmingham Mail reports the plane still landed safely and no one was injured. A passenger on board commended the pilot for remaining so calm during the violent storm.

When it comes to sports footage, getting the rights to air it can be a challenge. But WCJB sports anchor Zach Aldridge didn’t let that stop him from showing viewers the highlights.

After explaining he couldn’t air the Florida Gators-Dayton Flyers basketball game, he acted it out. And SB Nation said it was even better than the real deal. (Via WCJB)

Now, before you judge, plenty of other journalists have had to creatively work around this limit too. Even here at Newsy — in this case during the Olympics. A familiar face doing his best Michael Phelps.

Christina Hartman: “Our anchor Christian Bryant was kind enough to reenact some of it for you.” (Via Newsy)

Our No. 1 caught on camera moment is by far one of the coolest plane rides ever. Thanks to the Australian cast of “The Lion King” who gave an impromptu performance of “Circle of Life.” (Via YouTube / DisneyOnBroadway)

Hakuna Matata. It means “no worries.” And you could say that video got the lion’s share of views on YouTube — with 3.4 million. Talk about the flash mob of a lifetime. (Via YouTube / DisneyOnBroadway)