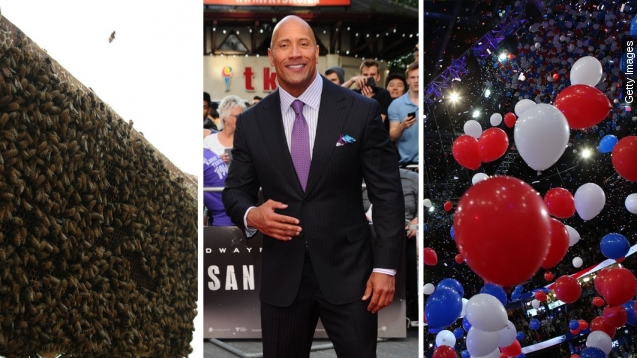 This week has been chock full of new world records. But none of these records are ones you’d hear on a daily basis — like the hottest chili pepper or the person with the most piercings. Nope, these new records all have an element that make them, well, a bit more bizarre.

Like a man in China who now holds the record for covering himself with the most bees.

ABC reports the man covered himself in 240 pounds of bees, which amounts to about 1.1 million buzzing insects.

And he was only wearing his underwear during the stunt.

He beat the current record of 188 pounds. And before that, the record involved a coat of bees weighing about 136 pounds.

Next, the most selfies taken in just three minutes.

And no, the record wasn’t set by the selfie queen herself, Kim Kardashian.

That record is now held by a different celeb: Dwayne “The Rock” Johnson.

Entertainment Tonight reports The Rock took 105 selfies with fans in just three minutes at the London premiere of his new movie “San Andreas.”

In a video he posted on Instagram, the actor pointed out his arms got “a helluva workout” from taking all those pics.

Johnson also holds the record for receiving the largest salary awarded to a first-time lead actor. For his part in the 2002 movie “The Scorpion King,” he earned $5.5 million.

And finally, a new record was set for one hundred balloons popped in just one minute. By a dog. (And yes, we did say new record.)

41.67 seconds is all it took for Cally The Wonderdog to pop 100 balloons on “Britain’s Got Talent.”

The Independent reports a pooch in the U.S. had previously held the record with 44.9 seconds.

This video contains images from Getty Images and music from Pierlo / CC BY 3.0 and Bensound / CC BY ND 3.0.