Top 3 Bizarre Stories Of The Week 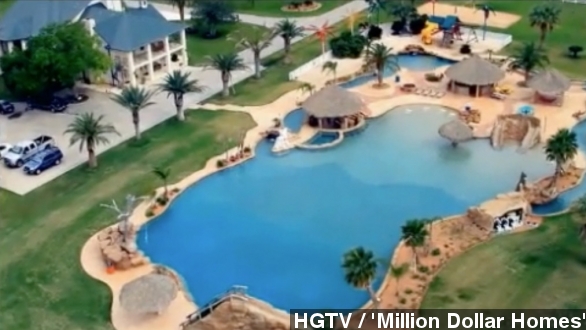 SMS
Top 3 Bizarre Stories Of The Week
By Katherine Biek
By Katherine Biek
August 15, 2014
Our top three bizarre stories from this week include the world's largest backyard swimming pool and some "cray" new words added to the dictionary.
SHOW TRANSCRIPT

This week, there were a lot of stories that made us scratch our heads. Not because they weren't interesting, but because they were so bizarre. From some interesting new words being added to the dictionary to a fast food restaurant wanting to become more high-class, these are your top three bizarre stories of the week.

First up, backyard swimming pools aren't uncommon in Texas. They're practically a requirement for people living under the sweltering sun.

But one Texas man set out to build the largest backyard swimming pool in the world, really driving home the point that everything is bigger and better in Texas. Owner Mike Mobley let KTRK take a look.

We don't even want to know what it costs to maintain that monstrosity. Built in 2009, the pool is so impressive, it was even featured on HGTV's "Million Dollar Homes."

"This is one of the best views of this pool you're ever going to find. You can take a look and see the amount of water in front of you. There's over 750,000 gallons of water."

Mobley's not keeping the coolest pool ever to himself. He allows neighbors and friends to stop by for a swim all the time. The next time we're near El Campo, Texas, we hope he doesn't have a problem with us taking a dip.

Next, Mexican fast food chain Taco Bell is trying to go high-class with a new restaurant.

A writer for Nation's Restaurant News wrote in April that Taco Bell came up with the idea for the restaurant after discovering a large portion of the population doesn't eat fast food.

But what do people think of this new restaurant and its American spin on Mexican food?

A writer for The Huffington Post says, "The store's logo and interior look something like an Ed Hardy nightmare of Dia de los Muertos."

And a blogger for OC Weekly felt the food fell short, although he thought the concept of the food was "genuinely cool."

OK, so reviews weren't that great, but we think you should always try something for yourself. And that lobster taco sure does sound delicious.

Finally, a bunch of new words have been added to the Oxford Dictionary.

​Fifty, to be exact. In a blog post, Oxford University Press made the big announcement in a way that was too funny not to share.

"We don't mean to humblebrag, but the August update to OxfordDictionaries.com is bare good and nailed on to interest and impress you. Throw an air punch or have a bro hug (don't be cray and throw shade or show us the side-eye); be a baller and join the hyperconnected vocabulary fandom."

NBC obtained a list of the new words, and some favorites include "amazeballs," "hot mess" and "live-tweet."

Even "zonkey" made the list. Yes, that does mean a donkey and zebra hybrid.

​​"Good Morning America"'s Amy Robach says her kids use some of these words all the time.

"Did you know what they were saying?"

"The secret language of preteens."

It's OK, Amy, we don't know what half of the new words mean, either. I mean, "hench"? Oh, that's used to describe a guy who has really big muscles. You mean, like these bad boys? Yeah, just like those.