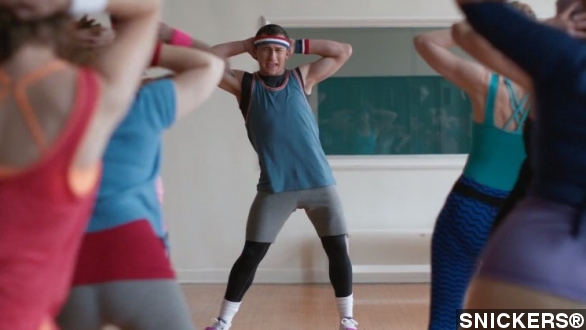 Usually, we've got to wait until the Superbowl for the best and most hilarious sports commercials come out. But, it looks like companies' marketing teams are giving the gift of laughter a little early this year. Here's our favorite sports commercials airing right now.

First up — he's one of the NFL's best quarterbacks, but don't try buying Gatorade from Broncos' QB Peyton Manning's convenience store without sweating for it.

"Why don't I just get my manager and he'll help you guys, okay? Boss!"

We'd say he pulls off a pretty convincing store manager.

Likely because he's been in his share of acting roles on TV, ranging from DirecTV commercials —

"There's a fantasy channel that you've got to see."

To Mastercard commercials, "Don't choke on it."

"Good call. I'll just cut it up and put it into a fruit salad or something."

Even to appearances on NBC's Saturday Night Live.

This next commercial features an NFL quarterback new to the league and fairly new to commercials. Still, Browns QB Johnny Manziel isn't letting that stop him from leading his yoga class in this Snickers commercial.

"Come on gang! Work those thighs!"

"Because you're Johnny Football. ... Better?"

​"Better. Who are those ladies?"

Maybe Manziel was just trying to get his hands on Snickers this whole time...

It's not Johnny Football's first commercial though. He been featured in a local Cleveland car dealership commercial —

And even made a brief appearance with LeBron James in a McDonalds ad.

While our last one doesn't feature any NFL players, we still get a huge laugh out of it. In this Foot Locker ad featuring NBA greats James Harden, Charles Barkley and Scottie Pippen, Harden asks for advice on how to start the season off right. Barkley's advice?

"Look. All I know is all the greats have short memories. Scottie Pippen knows."

"I sure do and I'm the greatest Chicago Bull of all time."

Pippen does have six NBA Championship rings after all, but as Bleacher Report points out, "Some guy named Michael Jordan did help Pippen get those six rings."

Yeah, it's pretty tough to outshine that guy.

And you could say it's tough to outshine these commercials too. Suddenly, I'm hungry, thirsty, and ready to buy some sneakers!