Top 3 Animals In Places They Probably Shouldn't Be 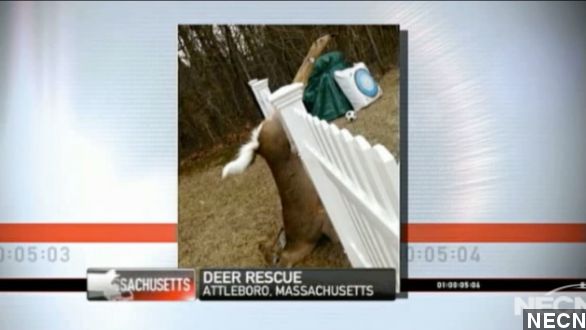 SMS
Top 3 Animals In Places They Probably Shouldn't Be

By Candice Aviles
March 28, 2014
This week's top 3 animal videos involve a deer and shark that literally got caught up in the moment and elephants that attempted a great escape.
SHOW TRANSCRIPT

This week’s top 3 animal videos all involve creatures in places where they probably shouldn’t be. We have a deer and a shark that literally got caught up in the moment and elephants that attempted a great escape.

Let’s start with a deer who wanted to jump over a fence. But didn’t quite make it over.

The family that rescued the deer originally thought its legs were tree branches in the fence. It’s not every day you get a photo of a deer doing a hoof-stand. (Via WBZ-TV)

Speaking of memorable photos, a group of young fishers in Florida got the picture of a lifetime after catching a massive hammerhead shark. You gotta see it to believe it.

That is huge. The fisherman who caught it says it took more than an hour to reel it in. (Via WPEC)

The fishers let the giant shark go after getting it on camera. Hopefully it’ll stay far, far away from the shore in the future. (Via YouTube / Viktor Hluben)

Our No. 1 pick goes to some gutsy elephants that got a little tired of the circus life. So they tried to run away.

But the three elephants from the St. Louis Moolah Shrine Circus only made it to the parking lot. They did some damage during their outing, bumping a few cars here and there. (Via KSDK)

A witness told KMOV the elephants were loose for a little under an hour. The important thing: no one got hurt.

Thanks for watching our top 3 animal videos of the week. We’ll see you next week.