Top 3 Animal Stories Of The Week 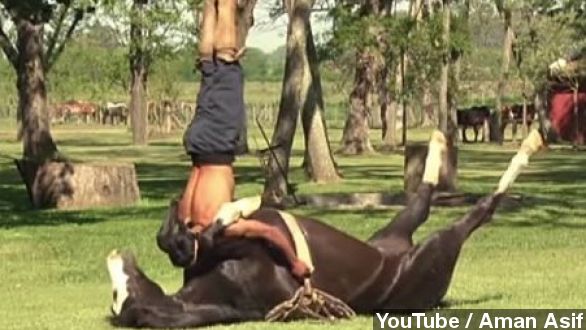 By Candice Aviles
April 10, 2014
This week's top 3 animal stories all involve animals acting like humans. We have a rat riding the train, a whining dog and a horse doing yoga.
SHOW TRANSCRIPT

Sometimes animals act a lot like humans. They ride the train, try to get out of going to bed… and do yoga. Yoga? True story.

Right... our No. 3 pick goes to a rat that decided to take a ride on a New York subway train. And as TIME puts it, some passengers “completely lose it.”

“I think I can deal with this over a cockroach.”

“I don’t get it I would much rather take my chances with a cockroach than a rat.” (Via ABC)

Ok, I’m team cockroach on this one.

Really? Well… Yea me too.

Our No. 2 pick is the cutest effort I’ve ever seen to avoid going to bed. A Upopin writer says while we’ve all seen kids try to get out of going to sleep it’s just that much better coming from a little bulldog.

After putting up that little fight to stay awake, the cute pup eventually dozes off. We've got to side with a writer for People who said it's best to listen to Mom and just go to bed.

Let’s go from adorable to flat out odd. Our No. 1 spot goes to animals doing yoga. Horses doing yoga.

So, The Huffington Post says this practice was created over 50 years ago in San Luis, Argentina and is used to help tame horses. Whether it works or not? That’s still up in the air because no one is really sure if the horses are relaxed during it.

Thanks for watching our Top 3 animal videos of the week.