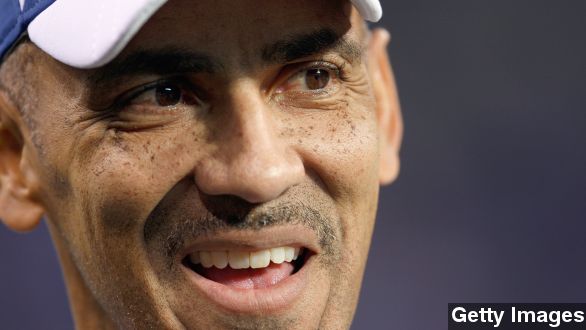 By Jamal Andress
July 22, 2014
Tony Dungy clarifies his comments about why he wouldn't draft Michael Sam, but should anyone be surprised by what he said in the first place?
SHOW TRANSCRIPT

Food for thought: if you ask a man — who is openly against gay marriage — if they would draft a gay football player, is it fair to be shocked by the comments that follow?

"I was astonished by Tony's statements."

"This is the greatest height of hypocrisy"

Fair or not, that has been the fate of Tony Dungy.

Sunday, the Tampa Tribune published an article that dealt with Michael Sam and NFL coaches changing the culture of NFL locker rooms. In it, Tony Dungy says, "I wouldn’t have taken him. Not because I don't believe Michael Sam should have a chance to play, but I wouldn't want to deal with all of it. It's not going to be totally smooth … things will happen."

Shortly after the article was published, headlines around the sports world turned their attention to Dungy's comments and by Tuesday morning, the former Bucs and Colts head coach was "clarifying" his statements. (Via USA Today)

A similar firestorm arose when NBA analyst and another self-proclaimed opponent of gay marriage Chris Broussard was invited to give his opinion on the NBA's first openly gay player, Jason Collins. (Via YouTube / Hot 97)

"I believe that's walking in open rebellion to God and to Jesus Christ. I would not characterize that person as a Christian." (Via ESPN)

It's a pattern we're all too familiar with — public figures putting their feet in their mouths. And while the subsequent removal surgery is almost always painful to watch, should Dungy's comments even be given attention?

Well one writer from Newsweek says this time of year brings a mad dash of reporters for even a hint of controversy in the sports media world. "We have just embarked on sports’ drowsy days. ... And here, at the outset of the slowest sports week of the year, a non-controversy, a 'nontroversy,' was born."

Some commentators say Dungy's stance is all too predictable. In 2007, he accepted the Friend of Family Award for supporting a ban on gay marriage in Indiana. (Via Indiana Family Institute)

And in 2012, in response to President Obama's stance on gay marriage he tweeted, "I was disappointed he veered from biblical view."

To clarify his statements, Dungy said, among other things, "I was not asked whether or not Michael Sam deserves an opportunity to play in the NFL. He absolutely does." (Via Getty Images / NBC)