Tony Blair Says 2003 Invasion Not To Blame For Iraq Crisis 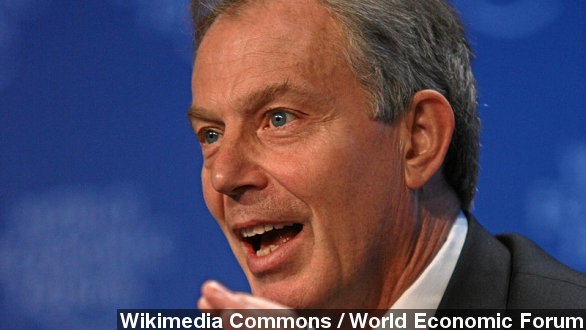 Tony Blair, the former United Kingdom prime minister who helped President Bush build the case for the invasion of Iraq, has chimed in on the recent violence in the country as the Iraqi government tries to fight off a growing insurgency.

Blair told reporters he believes the West should take an active role in Iraq once again, and said he supports military options up to but not including sending in ground troops. (Via NBC)

"This is a regional problem. But, it's a problem that will affect us. ... We have to understand what's going on there and we have to engage. And it doesn't mean, by the way, engagement as in Iraq or Afghanistan and ground troops." (Via BBC)

The former prime minister also wrote in a blog post that he believes Iraq's troubles stem from the Syrian crisis, and attacked critics who say the country wouldn't be in the shape it's in if not for the 2003 invasion. "Rather than continuing to re-run the debate over Iraq from over 11 years ago, realise that whatever we had done or not done, we would be facing a big challenge today."

As one of the architects of the last Iraq war, it's no surprise Blair's comments on the current situation are splitting opinion.

The Independent reports many senior members of Blair's Labour party are distancing themselves from his comments, painting them as hawkish and militaristic. Shadow Foreign Secretary Douglas Alexander said military action isn't warranted. "T ruth is that it is the Iraqis themselves who hold the key to resolving this crisis."

Though Blair did have some support in the form of his former ambassador to the U.S.

"We do not want to get caught in someone else's civil war. But, we do  have to remember that Iraq is an ally and we helped to put it together as it is now...We should give them appropriate help, but not boots on the ground."  (Via ITV)​

Blair isn't the only controversial figure in the Iraq war speaking out this week. Chelsea Manning, the former soldier who was sentenced to 35 years in prison for leaking thousands of pages of classified documents to WikiLeaks, published an op-ed on Iraq in The New York Times.

Manning blamed the media for tricking the American people into thinking all was well in Iraq after the 2010 elections. "You might remember that the American press was flooded with stories declaring the elections a success, complete with upbeat anecdotes and photographs of Iraqi women proudly displaying their ink-stained fingers. The subtext was that United States military operations had succeeded in creating a stable and democratic Iraq. Those of us stationed there were acutely aware of a more complicated reality."

Manning blamed the problem on embedded journalists who get comfortable being censored by the military. CNN's Barbara Starr said while that may be partially true on the front lines, war journalism is still largely independent.

"You only have to look at our own Arwa Damon ... who for years has very assertively, independently reported at great person risk from Iraq and from hot spots around the world."

ISIS, an al Qaeda affiliated group, continues to control two of Iraq's key cities and is attempting to move into Baghdad. The U.S. has begun relocating embassy staff.