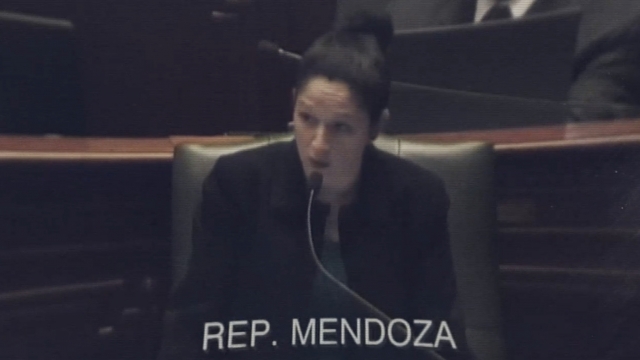 It's not unusual for political campaign attack ads to distort the truth or leave out some context. But one ad used in the Chicago mayoral race is especially misleading.

"I could administer the death penalty myself and sleep like a baby at night. As a matter of fact, I believe that our current manner of executing the guilty in Illinois is much too compassionate."

That's the voice of mayoral candidate Susana Mendoza. The clip is from an Illinois House of Representatives session in 2011 where state lawmakers were discussing the death penalty.

The sections edited together for the ad make it sound like Mendoza is a staunch supporter of the death penalty. But her statements in context make the exact opposite argument.

For example, her comment about "sleeping like a baby" was specifically referring to the use of the death penalty on "cop killers and serial murderers" — a detail the ad left out. She also said she'd need to be 100 percent sure of the person's guilt.

Her whole floor speech was about Mendoza's change of opinion on the death penalty. She specifically called out the innocent people Illinois has almost executed as a key reason for changing her mind. She said QUOTE, "I rise in acknowledgment of the fact that our death penalty system is broken beyond repair and that the right thing to do is abolish it."

The misleading ad was put out by another candidate for Chicago mayor, Toni Preckwinkle. Our partners at Politifact reached out to her campaign and a spokesperson defended the ad, saying it "was reflective of [Mendoza's] extreme values on the issue."

However, the Preckwinkle campaign's lack of context and use of highly selective editing resulted in an ad that misrepresents the truth.