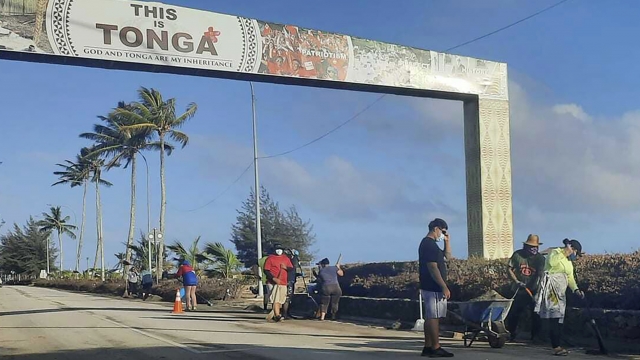 SMS
Tongan People Struggle To Connect To Rest Of The World After Eruption
By Jason Bellini
By Jason Bellini
January 19, 2022
There is no internet access, and the company that owns the single underwater fier-optic cable says it was likely severed in the eruption.
SHOW TRANSCRIPT

Tongan islands have been making headlines this week after a volcanic eruption cut them off from the rest of the world.

The eruption is thought to be one of the strongest felt on Earth in the last three decades. It happened Saturday underwater and was so strong it caused a tsunami along the western cost of the main island of Tongatapu.

The eruption cut the internet to Tonga. The company that owns the single underwater fiber-optic cable said it was likely severed in the eruption and repairs could take weeks.

With communication down, both Australia and New Zealand sent flights to survey the damage, but many people are anxiously waiting to hear from their family members in Tonga.

Talita Kefu, a recent immigrant to the San Francisco Bay Area from the island nation of Tonga, received video from her brother back home after the volcano first erupted on Saturday.

"He was showing me that they were in a traffic jam because everyone was trying to move inland and back home," Kefu said. "People would just like try to get towards any higher ground or going more away from the waterfront."

Kefu then had to wait until Monday when her twin sister got access to a satellite phone to find out the rest of her family was OK.

TALITA KEFU: She borrowed someone else's phone to try to let me know they're OK, and that's all I needed to hear. I started crying.

NEWSY'S JASON BELLINI: And have you spoken with your sister again?

KEFU: Not my sister but my uncle. I got ahold of him today, and I had six minutes with him.

BELLINI: Did he describe to you what the situation is like there?

KEFU: Basically, to say that they're busy cleaning up. The thing with Tongans — they always downplay stuff. Yesterday, which was Wednesday back home, people were starting to return to normal work, especially if you're an essential worker for the banks, the government ministries. It was back to business as usual.

BELLINI: What are you worried about, if anything, right now?

KEFU: I am worried because yes, my family are OK, but Tongans have a strong sense of family and community, so despite my family being OK, I'm getting messages from Tongans all over because they've seen the success of having been communicating with mine and asking if I can get a hold of theirs. So I am worried for their loved ones in trying to make contact on their behalf.

BELLINI: Are they in need of food, supplies, water?

KEFU: The agriculture is largely a subsistence economy, so a major part of our food is grown not only for families to consume daily, but also for export that is completely wiped out. So there's definitely going to be a food shortage, and water is definitely an issue.

Kefu moved from Tonga to the U.S. in 2019 after getting married to a Tongan who lived near San Francisco. Eleven months ago, she had a son, and because of the pandemic, her family hasn’t gotten to meet him yet.

But, at this moment, Tongans are taking the first step to make physical contact with the outside world possible.

"Back home, we use coconut brooms," Kefu said. "There were at least 200 men at the airport because we had to clear the ash from the runway in order for the New Zealand and Australian planes to land to deliver aid. The 200 men were on the runway with hand brooms clearing the ash. It may be surprising for many, but for me, it just shows the common spirit and how resilient the people are."