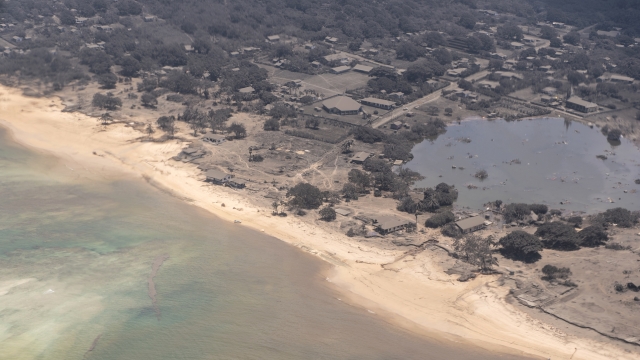 SMS
Tonga Avoids Widespread Disaster Despite Massive Volcanic Eruption
By Associated Press
By Associated Press
January 18, 2022
Eruption of the Hunga Tonga Hunga Ha'apai volcano Saturday sent a plume of ash into the South Pacific atmosphere and could be heard as far as Alaska.

Despite sitting almost on top of the volcano that erupted so violently on Saturday, the Pacific nation of Tonga appears to have avoided the widespread disaster that many initially feared.

Perhaps the biggest problem is the ash that has coated the main island and transformed it into a gray moonscape, contaminating the rainwater that people rely on to drink. New Zealand's military is sending fresh water and other much-needed supplies, but said Tuesday the ash covering Tonga's main runway will delay the flight at least another day.

Tonga has so far reported two deaths, and concerns remain over the fate of people on two smaller islands that were hard hit. Communications have been down everywhere, making assessments more difficult.

But on the main island of Tongatapu, at least, life is slowly returning to normal. The tsunami that swept over coastal areas after the eruption was frightening for many but rose only about 2.7 feet, allowing most to escape.

U.N. humanitarian officials and Tonga's government has reported "significant infrastructural damage" around Tongatapu. New Zealand's High Commission in Tonga also reported significant damage along the western coast of Tongatapu, including to resorts and the waterfront area.

Satellite images captured the spectacular eruption of the Hunga Tonga Hunga Ha'apai volcano on Saturday, with a plume of ash, steam and gas rising like a giant mushroom above the South Pacific. The volcano is located about 40 miles north of Tonga's capital, Nuku'alofa.

Two people drowned in Peru, which also reported an oil spill after waves moved a ship that was transferring oil at a refinery.

In Tonga, British woman Angela Glover, 50, was one of those who died after being swept away by a wave, her family said.

New Zealand's military said it hoped the airfield in Tonga would be opened either Wednesday or Thursday. The military said it had considered an airdrop but that was "not the preference of the Tongan authorities."

New Zealand also sent a navy ship to Tonga on Tuesday, with another planned to leave later in the day, and pledged an initial $680,000 toward recovery efforts.

Australia sent a navy ship from Sydney to Brisbane to prepare for a support mission if needed.