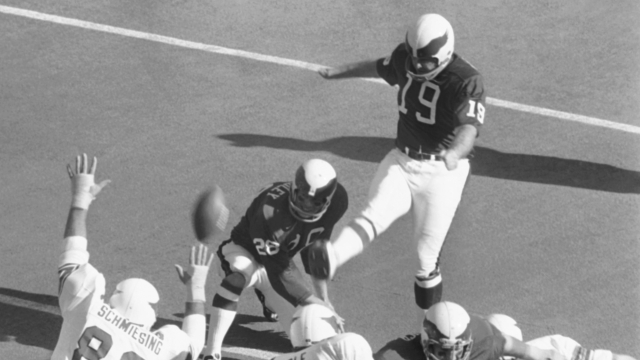 Tom Dempsey, a former NFL-kicker who became a New Orleans Saints legend when he blasted a then-record 63-yard field goal in 1970, has died. He was 73.

Dempsey's daughter, Ashley Dempsey, said Sunday her father died of complications from the coronavirus — contracting it in a New Orleans assisted living facility where he lived for several years. The coroner has yet to announce an official cause of death.

Dempsey, number 19, is best known for kicking the 63-yarder in the final seconds of a November, 1970 win over the Detroit Lions. That record wouldn't be broken until 2013.

Despite being born with out toes on his right, kicking foot, and missing fingers on his right hand, the Milwaukee native played for five teams over 11 seasons before retiring after the 1979 season. He wore a special boot now in the Football Hall of Fame.

Saints owner Gayle Benson said in a statement released by the team, "Tom's life spoke directly to the power of the human spirit."

Dempsey is survived by his wife, his sister, three children and grandchildren.