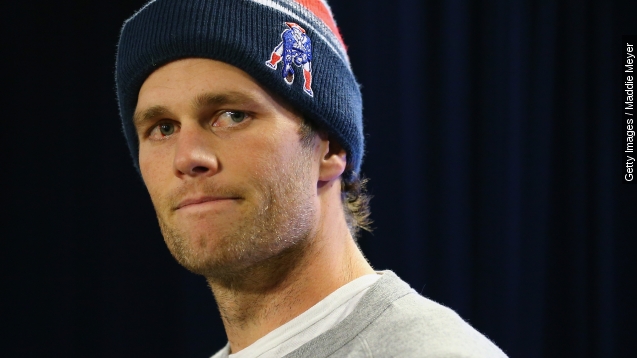 Patriots quarterback Tom Brady finally has his day in court Tuesday for the AFC Championship deflategate scandal and his chances of getting a reduced suspension seem pretty good.

Football's golden quarterback will go in front of commissioner Roger Goodell to plead his case that he had nothing to do with deflating footballs and, therefore, should have his four game suspension reduced.

The Ted Wells report released in May says Brady was "at least generally aware of the inappropriate activities" performed by Patriots staffers.

"I don't know. I didn't do that, Ron. I get the snap, I drop back, I throw the ball," Tom Brady said during a press conference.

The scandal has brought into question Brady's relatively squeaky-clean reputation. But if the NFL backtracks on its punishment, Brady's reputation may be good as new. But as ESPN reports, Goodell may not have the final say.

"For Brady, the good news is even if Goodell rules against him, the commissioner has been so tarnished that his judgement carries no weight — atleast in the court of public opinion which is ultimately where this case will ultimately be decided," ESPN reports.

In fact, an NFL.com writer suggests a lack of cooperation may be the only thing he gets slammed with. For Brady, that may be okay.

"Say training camp is underway when the decision comes from Goodell. Would Brady want to keep fighting or get on with 2015? His past history indicates he might want to put this all to bed."

In a online poll of readers conducted by New England network NESN, the overwhelming majority of responders, more than 50%, felt Brady's four game suspension would be lifted.

The Patriots have been fined $1 million and stripped of draft picks in the wake of the scandal. Owner Robert Kraft says he will not appeal those punishments.

This video includes Getty Images and music from Broke For Free / CC BY NC 3.0.