Tom Brady Is The Greatest QB Of All Time, By The Numbers 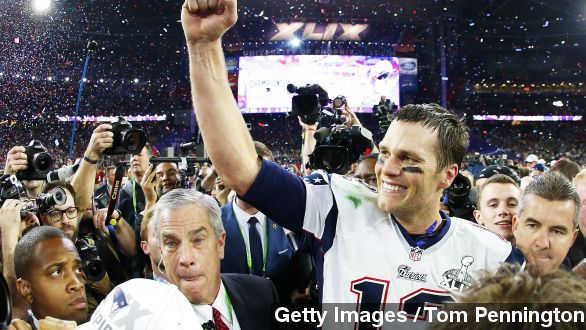 SMS
Tom Brady Is The Greatest QB Of All Time, By The Numbers
By Jamal Andress
By Jamal Andress
February 2, 2015
Newsy goes by the numbers to debate Tom Brady's place among the greatest quarterbacks to ever play the game.
SHOW TRANSCRIPT

The New England Patriots are the world champions of the NFL, making Tom Brady a four-time Super Bowl champion.

Brady finished the big game with 328 yards, 37 completions — a Super Bowl record — four touchdowns and a late fourth-quarter drive which saw Brady go eight for eight to seal the deal.

But where exactly among football greats does this monumental victory put the future Hall of Fame New England quarterback? Well, we all love a good "greatest of all time" debate, don't we?

"This is a legacy drive. If you lead them to score here now, you're in the conversation of, 'Is he the greatest of all time?'" Willie Geist told MSNBC.

“Everyone in New England thinks Tom Brady is the greatest human being on the planet — the greatest American for sure." Steve Levy said on ESPN.

"His performance yesterday was not Brady-esque. It was not up to par." George Martin told CNN.

"Tom Brady states his case as the greatest quarterback of all time," a Fox Sports anchor said.

So where does the four-time Super Bowl winner rank among the Elways, Johnny Us and Joe Montanas of the football world? Well, let's discuss:

After 15 years in the league, Brady and the Patriots have missed the playoffs just twice, racking up 20 wins and eight losses in the postseason. That's the most playoff wins of any quarterback in history — four more than Joe Montana, who's next on the list.

Brady has ruled the AFC with an iron fist during his 15 seasons in the league, taking the AFC title six different times and the AFC East crown 12 out of his 14 years as a starter, another NFL record.

Not that the Bills, Dolphins and Jets have put up much of a fight for that crown during Brady's tenure.

As for total wins, Tom Brady still trails his arch AFC rival Peyton Manning and of course Brett "The Gunslinger" Favre — both legends in their own right, but both also have struggled in the postseason.

Along with the extra Super Bowl rings, Brady's postseason winning percentage is a lot higher. (Video via AT&T)

Speaking of Super Bowl rings, no one has more than Joe Montana and Terry Bradshaw. (Video via Fox Sports)

Both QBs are 4-0 in the big game, but Joe Cool has a 127.8 passer rating with a legendary 11 TDs and zero interceptions.

But with the big win Sunday night over the Hawks, Tom Brady pushes past his childhood idol with 13 Super Bowl TDs and ties Montana with a third Super Bowl MVP.

And let us not forget, Brady still has time to tack onto that. After his 15 years in the league, six Super Bowl appearances, four Super Bowl rings and three Super Bowl MVPs, he shows no signs of slowing down.