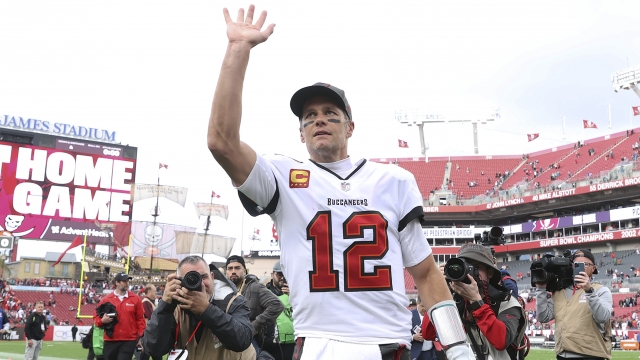 “This is difficult for me to write, but here it goes: I am not going to make that competitive commitment anymore,” Brady wrote in a lengthy post on Instagram. “I have loved my NFL career, and now it is time to focus my time and energy on other things that require my attention.”

Brady has long stated his desire to spend more time with his wife, supermodel Gisele Bundchen, and three children despite still playing at the top of his game.

The 44-year-old Brady goes out after leading the Tampa Bay Buccaneers to a Super Bowl title last season and NFC South championship this season.

News of Brady’s pending retirement leaked Saturday. His family and the Buccaneers denied that he had made a final decision, and he said Monday night on his SiriusXM podcast he wasn’t ready to finalize his plans.

“I’ve done a lot of reflecting the past week and have asked myself difficult questions,” Brady said in his post. “And I am so proud of what we have achieved. My teammates, coaches, fellow competitors, and fans deserve 100% of me, but right now, it’s best I leave the field of play to the next generation of dedicated and committed athletes.”

Brady thanked the Buccaneers organization, his teammates, ownership, general manager Jason Licht, coach Bruce Arians, his trainer Alex Guerrero, agents Don Yee and Steve Dubin and his family in his nine-page post. He didn’t mention the New England Patriots, where he spent his first 20 seasons and won six Super Bowls. Of course, Brady thanked the Patriots and coach Bill Belichick after he left the team to sign with the Buccaneers in March 2020.

Brady said he's still figuring out how he'll spend his time but he plans to be involved in his TB12 health and wellness company, Brady clothing line and NFT company.