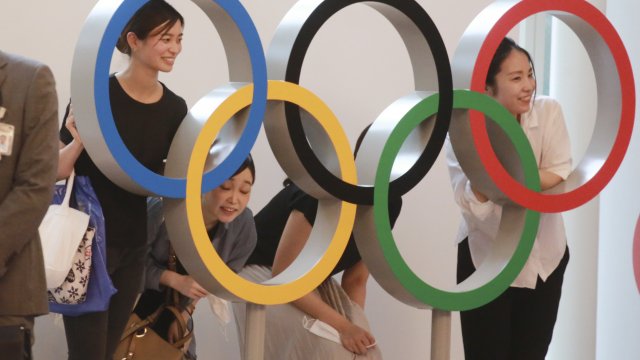 SMS
Tokyo State Of Emergency Leads To New Restrictions, Ban on Spectators
By Terace Garnier
By Terace Garnier
July 8, 2021
Top Olympic officials and athletes are arriving in Tokyo to spikes in COVID19 cases, a state of emergency and a ban on spectators.
SHOW TRANSCRIPT

Top  Olympic officials and athletes are arriving in Tokyo to a state of emergency -- just declared. Weeks before the games are set to begin. Spectators will no longer be allowed.

“I was longing for this day for more than one year… I know that the athletes are feeling the same. Hundreds of them have already arrived here in Japan and Tokyo and they all are very happy to be here to have the games happening and happening in a safe way,” International Olympic Committee President  Thomas Bach said.

Newsy spoke to an Olympian in June….. and the pentathlon competitor told us she understands why Japan is taking certain precautions, which at that time already included not allowing athletes to bring family or friends to the event.

“I know they can't be there. So, that, I mean that, that hurts. They really can't be there to see or watch me. But I know that they're there with me in spirit,” Army Sgt. Samantha Schultz said.

Now, just a few weeks later-- a complete ban on fans at the games in Tokyo and surrounding areas.

But this is not the first time the highly anticipated event has been hobbled by COVID-19. The games have already been postponed for a year. Thousands of volunteers, health professionals and residents protested the games being held at all amid the virus spread… and those protests continue.

“Infections will definitely spread if the Olympics are held, and overseas visitors will bring the virus back to their home country. It will be a disaster. My poster says.."