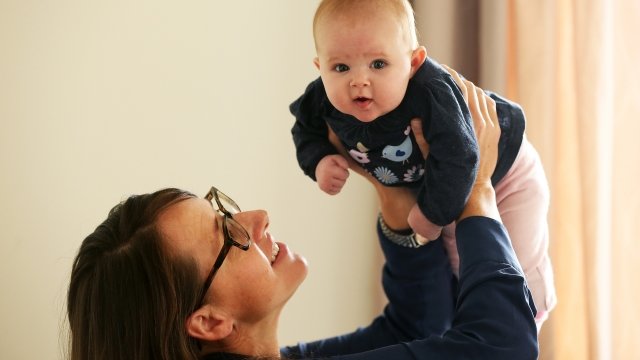 They're also more likely to be single.

Modern motherhood is growing in numbers and diversity. New moms are now older, better educated and more likely to be single, reversing decades of trends.

Here's what that looks like" 86 percent of women aged 40-44 are now mothers, compared with 80 percent in 2006. That's according to a Pew Research Center analysis of U.S. Census Bureau data.

Also growing? Family size. Women now have 2.07 children on average, up from 1.86 in 2006, the lowest number on record. The recent rise in motherhood and fertility seems to run counter to the notion that the U.S. is in a post-recession "Baby Bust," meaning decreasing fertility.

The History Of Paternity Leave? There Isn't Much

President Trump talked about paid family leave in his State of the Union, but we're still far from paternity leave being a norm.

Dig a little deeper into the Pew analysis, and this is what you find:

— The share of women at the end of their childbearing years who have never married has risen from 9 percent in 1994 to 15 percent in 2014. Among these women, a majority now — 55 percent — had at least one child.

— Over the same time span, 82 percent of women at the end of their childbearing years with a bachelor's degree were mothers, compared with 76 percent in '94.

— The most dramatic increase in motherhood was among the relatively small group of women in their early 40s with a Ph.D. or professional degree, 80 percent of whom are mothers. A few decades ago, that was 65 percent.

— The median age when women become mothers in the U.S. is 26, compared with 23 years old in the '90s. The biggest cause seems to be a steep decline in teen moms.

— Delayed childbearing is also extending into women in their early 20s, making it more common to become a mother after 25 or in your 30s and 40s.

There are a lot of reasons why women are delaying having a baby, and obviously it depends on a particular woman's circumstances. The list of reasons includes: later marriage; student debt, stagnant wages, recovery from the recession; more education and improved job prospects for women; and a lack of support for families in which both parents work.

Will this maternity uptick continue into the future? That remains to be seen. There are some obstacles. For instance, the ability to have a baby decreases with age, fertility treatments are expensive, and paid family leave is still an not offered to millions of workers.

Clearly, the hurdles can be high. Sleep can be nonexistent. Money can be tight. But more women are tackling the challenge and choosing to start families all their own. Some you'd typically see on Nick at Nite, others you're more likely to find on Netflix.