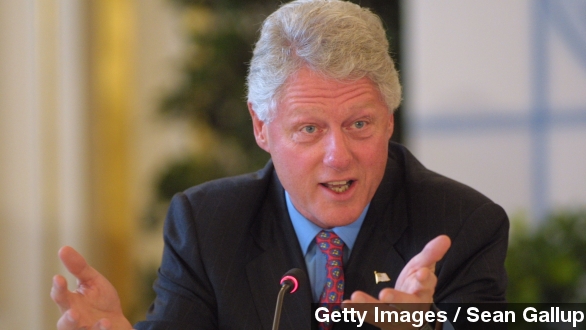 SMS
Today In 1999: Clinton's Impeachment Takes A Turn
By Zach Toombs
By Zach Toombs
January 7, 2015
Only about one-fourth of Americans alive today were old enough to remember much about the Clinton-Lewinsky controversy.
SHOW TRANSCRIPT

“It depends upon what the meaning of the word ‘is’ is,” President Clinton said in a tape released by the U.S. Senate.

It was a scandal that changed the way we talk about politics.

“This vast right-wing conspiracy that has been conspiring against my husband,” Hillary Clinton said on NBC's "Today" show.

And Wednesday marks 16 years since a major turning point in the Lewinsky-Clinton drama: the start of the Senate impeachment trial that ultimately acquitted Bill Clinton of charges.

“The Senate has met almost exclusively as a court of impeachment since Jan. 7, 1999,” Republican House Majority Leader Trent Lott said, broadcasted by C-SPAN.

Today, about a quarter of Americans are too young to remember much at all about the controversy that began almost two decades ago, when 21-year-old Monica Lewinsky began an internship at the White House and became involved in a relationship with President Clinton.

Later moved to a job at the Pentagon, Lewinsky confided in Defense staffer Linda Tripp.

“I’m sick of it. I hate it all,” Lewinsky said in a recorded conversation.

Those tapes, secretly recorded by Tripp, were eventually handed to Ken Starr, an independent counsel investigating a wide range of Clinton-era controversies.

That same month, Jan. 1998, the reports had hit the press and the president was on the defense.

“I did not have sexual relations with that woman,” Clinton said.

He said the same thing about Lewinsky while testifying under oath in a separate case over sexual harassment.

But by July, Lewinsky had reached an immunity deal with Starr and soon after testified before a grand jury.

And on Aug. 17, after testifying to a grand jury himself, President Clinton finally did admit wrongdoing.

“Indeed I did have a relationship with Ms. Lewinsky that was not appropriate. In fact, it was wrong," Clinton said.

“The evidence suggests that the president repeatedly tried to thwart the legal process in the Jones matter and in the grand jury investigation. That is not a private matter," Starr said.

The charges facing Clinton included perjury to a grand jury and obstruction of justice, and on Dec. 19...

“President Clinton stands impeached by the House of Representatives,” Dan Rather announced for CBS.

“I hope there will be a constitutional and fair means of resolving this matter in a prompt manner. Meanwhile, I will continue to do the work of the American people,” President Clinton said from The White House.

Notably, even at the height of controversy, public approval for the president remained high on the back of a booming economy.

“68 percent of Americans believe President Clinton can still be an effective leader.”

Less than a month later, the Senate began its own hearings. And although as many senators voted for impeachment as voted against it, the Senate didn’t reach the supermajority needed.

“The Senate adjudges that the respondent William Jefferson Clinton is not guilty as charged in the second article of impeachment.”

This video includes images from Getty Images and music from Magu the Dog / CC BY NC SA 3.0 and Chris Zabriskie / CC BY 4.0.