Are White Voters Enough To Get Trump The White House? 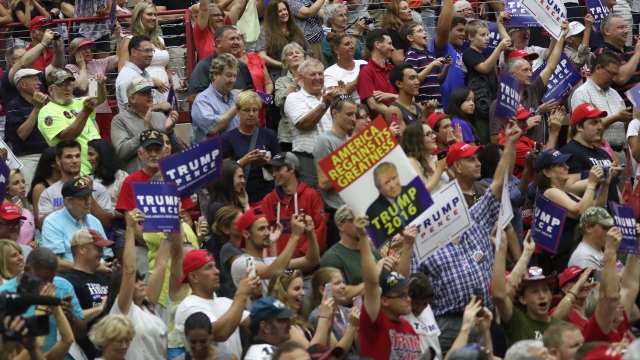 SMS
Are White Voters Enough To Get Trump The White House?
By Eugene Daniels
By Eugene Daniels
August 4, 2016
Unless he changes his tone when it comes to minorities, Trump's only hope is to get a strong hold on the white working class.
SHOW TRANSCRIPT

Donald Trump has a really hard time appealing to minorities. This is an issue GOP presidential candidates have struggled with since the 1960s, but Trump has really upped the ante this year.

So unless he changes his tone and tactics when it comes to minorities, Trump's only hope is to get a strong hold on the white working class and keep it until Nov. 8.

According to a poll released Thursday, only 17 percent of non-white voters support Trump — and that includes just 1 percent from African-Americans nationwide. Some of that may have to do with Hillary Clinton's convention bump, so those numbers could improve in a couple of weeks after everything settles down.

But it could also get worse: In just the past week, Trump got into a bizarre feud with the parents of a Muslim-American soldier killed in Iraq in 2004.

Trump's been laying the groundwork with the white working class since before he announced his candidacy. His primary race was built around white working class resentment of a changing world. And one of Trump's major platform planks is being against international trade deals, which have really decimated workers in the Rust Belt.

To be competitive, he'll have to do a whole lot better than other GOP nominees in the past, who received anywhere from 55 percent to 59 percent of the white vote in the most recent cycles. That's going to be pretty tough: No presidential candidate has won more than 66 percent of white voters since Ronald Reagan in '84, and the country looks a lot different than it did back then.