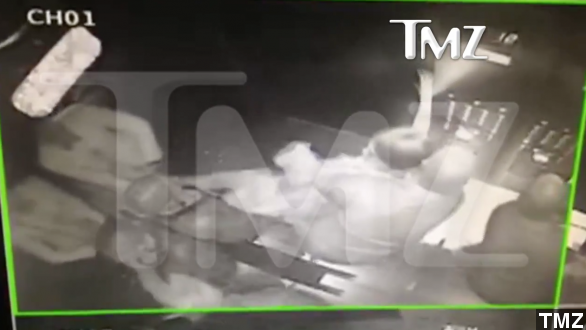 By Brice Sander
May 12, 2014
In a video released by TMZ, the outlet says Solange Knowles can be seen attacking her brother-in-law, Jay-Z, in an elevator at a Met Gala afterparty.
SHOW TRANSCRIPT

It turns out Solange Knowles might not be so crazy in love with her brother-in-law.

At least that's the feeling we get from this minute-long security video TMZ posted. The outlet says it shows the 27-year-old "violently attacking" Jay-Z in an elevator at a Met Gala afterparty last week.

A man — seemingly a body or security guard — appeared to restrain Solange and punched the emergency stop button on the elevator. Jay-Z did not fight back.

And as you can see in these freeze frames, Beyoncé didn't get involved in the altercation, even as her sister continued to yell at and apparently kick at her husband.

Hip-Hop Wired gave Jay props for not fighting back but was confused by Bey's complete lack of a reaction.

And Rap-Up notes Solange didn't look too happy leaving that party, seemingly after the elevator incident.

The Daily Mail reports Beyoncé left the event with her sister and Jay-Z left alone.

Of course, we have no idea what might have set off Solange — and so far, she hasn't commented publicly. (Via Twitter / @solangeknowles)

But TooFab says if Beyoncé's actions and the couple's appearance at a Brooklyn Nets game over the weekend are any indication, she's standing by her man.

Still, Vibe says this is the first time we've seen music's royal couple involved in any major controversy and that their PR teams are going to have a field day trying to explain it.

And, like many, the New York Post is left puzzled by the bizarre attack, saying the family has a "famously close" relationship.