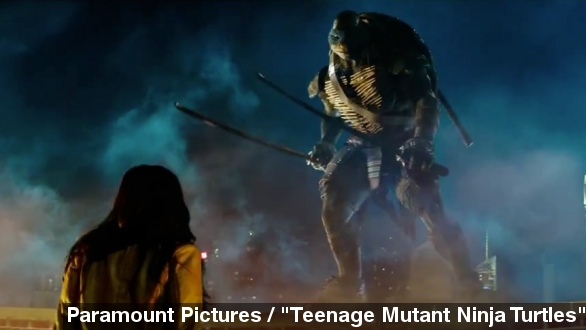 By Christian Bryant
March 27, 2014
The trailer for the new Teenage Mutant Ninja Turtle movie premiered at CinemaCon in Las Vegas and showed off a new origin story for the turtles.
SHOW TRANSCRIPT

After much speculation, photos from the set of the film and a widely mocked teaser poster, our heroes in a half shell have finally emerged from the sewers in the first full-length trailer for the "Teenage Mutant Ninja Turtles" reboot.

By the looks of it, New York is once again the proverbial playground for crime and destruction. (Via Paramount Pictures / "Teenage Mutant Ninja Turtles")

But fear not, we've got turtle heroes reprising familiar roles. Leonardo leads, Donatello does machines, Raphael is cool (but rude) and Michelangelo is a party dude. Just like old times.

Except maybe not. One of the largest visual takeaways from the trailer revolves around how the turtles look. We only get a few glimpses, but a writer for SuperHeroHype says, "The CG turtles don't look that bad."

A Washington Post writer agrees, saying "​The turtles look much less creepy than they have in previous forms, including the 1993 live-action version 'Teenage Mutant Ninja Turtles III' where the costumes looked like a weird combination of rubber and claymation."

I wasn't a huge fan of the "shogun" turtles, but how would you expect them to look in real life? (Via New Line Cinema / "Teenage Mutant Ninja Turtles III")

As far as the tone of the trailer, a writer for IGN thinks the new film will look "far straighter and more serious than expected."

For all the visual things people can get excited about in the new trailer — turtles and Megan Fox — there is at least one other thing that could send people into an uproar before the movie hits theaters.

"Heroes are not born, they're created. That's what your father and I were trying to do."

That ain't quite how I remember it.

"One day, I came across a shattered glass jar and four baby turtles."

"That was us." (Via New Line Cinema / "Teenage Mutant Ninja Turtles")

The origin story has been flipped a few times but the most familiar story involves Master Splinter and the turtles accidently coming in contact with radioactive ooze, not some deliberate plot to turn them into heroes.

Fans were a bit skeptical when it was first announced Michael "master of explosions" Bay would be producing the TMNT reboot. (Via The Guardian)

A writer for Gawker says fans still don't trust Bay to respectfully handle the franchise, even after he walked back comments that the turtles would be aliens.

But according to Wired, the first trailer for the film moved the reaction needle from "WTF" to "Um, maybe..."

How Shredder ends up going to the dark side is beyond us, but as long as the turtles "don't cut him no slack" and gorge on pizza, we'll be fine. There are some characters we don't want to see, though.

The "Teenage Mutant Ninja Turtles" reboot is scheduled to hit theaters this August.