Tiny Satellites, Like The One Tossed From ISS, On The Rise 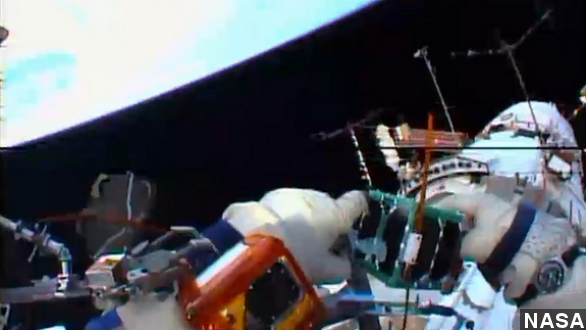 SMS
Tiny Satellites, Like The One Tossed From ISS, On The Rise

By Steven Sparkman
August 18, 2014
The Chasqui I, hand-delivered into orbit by a Russian cosmonaut, is one of hundreds of small satellites set to go up in the next few years.
SHOW TRANSCRIPT

Most of us probably have a mental picture of what it's like to put a satellite into orbit: a dedicated rocket launch, stage separation, the slow unfurling of the solar panels. (Video via NASA)

How far we've come. Monday, a Russian cosmonaut on board the International Space Station put a satellite into orbit with about the same amount of effort you'd use to toss your keys onto a table.

During a spacewalk, Oleg Artemyev deployed a Peruvian nanosatellite called Chasqui I by just picking it up and throwing it off the ISS. The satellite is meant to transmit pictures of Earth to Peru's National University of Engineering.

Satellites have been launched from the ISS before, most notably the bizarre SuitSat, a retired space suit outfitted with sensors that was thrown overboard in early 2006.

But Chasqui I and other small spacecraft are part of a big change in the satellite world: the theory that less is more.

Headlines talking up tiny satellites have been around for a couple years now, praising them for "doing the job of older satellites cheaper" and having price tags "in the reach not just of small firms, but also of start-ups and researchers."

A Forbes writer even went with the bold lede, "In the future, everyone on Earth will have ubiquitous access to outer space."

Many small satellites, like the standard 4-inch-square CubeSat, are light weight and rely on off-the-shelf components, pushing the price to get them into space down into the tens or hundreds of thousands of dollars. That's like one or two potato salads. (Video via European Space Agency)

Hundreds of small satellites are set to be launched in the next few years, though the vast majority won't be delivered by hand from the ISS.

This video contains an image from NASA.