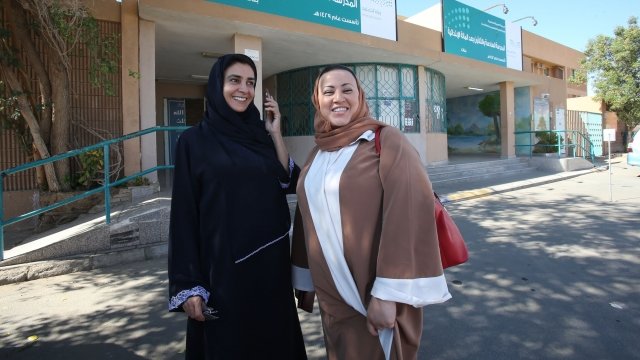 Starting next year, women in Saudi Arabia will be allowed to drive. But there's still a lot to be done in the fight for equality.

Saudi Arabia used to be the only country in the world that banned women from driving, but a recent order will change that next year. It's a step forward for a country that's made small, slow progress toward women's rights.

But to put this recent order into context, let's look at some of the events that led up to this.

We'll start in 1990, when around 50 women got behind the wheel in protest. The protesters were soon stopped by police, and some even lost their jobs. But they got international attention.

Since the Know Your Rights app was released last year, it's been downloaded tens of thousands of times.

The taboo against women driving wasn't expansive. For example, American women serving in the U.S. military who were stationed in the kingdom at the time of the protest were allowed to drive.

And women in rural areas of the country have been driving for years. But it wasn't until 2001 when women in the kingdom could be issued a Saudi ID.

Fast forward to 2008, when activist Wajeha Al-Huwaider posted a video on YouTube of her driving that went viral. Al-Huwaider and other women also submitted a petition asking Saudi Arabia's interior minister to lift driving restrictions.

In 2013, Saudi women were allowed to ride bicycles and motorbikes, but with a few caveats — like needing a male guardian nearby. Plus, the decision didn't mean bikes could be used as reliable transportation, since riding was confined to "recreational areas."

Saudi Arabia hasn't had many elections. But in 2015, women were able to both vote and run for municipal positions for the first time.

Which brings us to 2017. The country has made several progressive decisions along with ending the ban on women driving.

Activist Guliafshan Tariq is embarking on a nearly monthlong journey.

While the decision to allow women to drive is being celebrated by many, several questions have been raised. Human Rights Watch asks if "women will be allowed to drive on equal terms with men."

"In the West, the whole issue of the driving ban was given so much significance in the past ... it became a symbol of women's oppression in Saudi Arabia — in a way that many women activists and Saudi women often complained that ... the obsession with this restriction is taking away from looking at the more important issues," said Samira Atallah, an expert on the Middle East and North Africa region at Equality Now.

Currently, women in Saudi Arabia still need to ask a male guardian for permission for various tasks. That's something rights activists are fighting to change.

So, what's next for women's rights in the kingdom?

"Ultimately, the very so-called modernization of its economy, and the attempt to diversify and reduce dependencies on not just on oil economy, but to reduce dependency on foreign labor — all of this will prompt ultimately a bigger need to make structural changes such as the guardianship system," Atallah said.