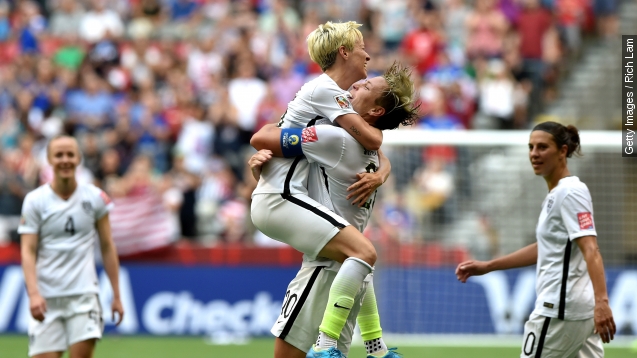 SMS
Time Running Out For USWNT's World Cup Dreams
By Matt Moreno
By Matt Moreno
June 17, 2015
The USWNT is moving on to the knockout stages of the World Cup, and for a core group of veterans, it could be the last run at it.
SHOW TRANSCRIPT

The U.S. Women's National Team is moving to the World Cup's knockout stages after topping the so-called group of death.

And for this U.S. Women's team, the stakes are high — one slip-up could eliminate the team, largely made up of a core group of players over the age of 30. With the World Cup every four years, that could be costly. (Video via Fox Sports)

The No. 2-ranked team in the world certainly has the talent to make a run, but if they don't make it happen this year, a large majority of the elite team could go without winning a World Cup.

A writer for USA Today says: "There's a very real possibility that [many of the] 30-somethings ... all could end their careers without ever winning a World Cup title. Think about that. Some of the most illustrious names to ever play the game, and they'd leave without winning the biggest prize of all."

The team is already suffering from a regression in offense from 2011. They've scored just four goals in three games at this point.

Wambach's been a key to the offense this year and in years past but has seen her playing time take a hit. She came off the bench in the 0-0 draw against Sweden, a game against former U.S. coach Pia Sundhage. In pregame comments, Sundhage said she would've played Wambach off the bench regularly if she was still coaching the U.S. team. (Video via Gatorade)

Complicating matters for the U.S.' offense, as SB Nation points out, is a less-than-stellar midfield. "There's no fix for this — the USWNT left all of their good central midfielders at home. ... This is a permanent problem."

Still, if the team can keep things going for the whole tournament, the group of seasoned veterans will be able to grab the U.S.' third World Cup, a first for many on the elite team. The U.S. Women's National Team continue their road to the World Cup final June 22.

This video includes images from Getty Images and music from Aviscerall / CC BY NC 4.0