Time Names Its 2015 Person Of The Year 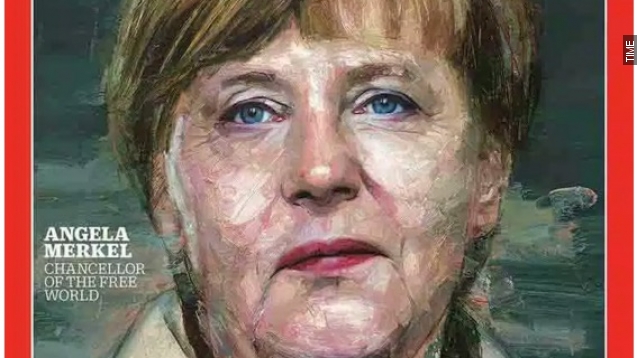 SMS
Time Names Its 2015 Person Of The Year
By Melissa Prax
By Melissa Prax
December 9, 2015
Time chose German Chancellor Angela Merkel as its Person of the Year. She beat a hefty list of contenders, such as President Obama and Uber's CEO.
SHOW TRANSCRIPT

Time just revealed its person of the year, and here's a hint: It's not the same as the people's choice, Bernie Sanders.

Time chose German Chancellor Angela Merkel, who has a long list of political accomplishments, including being Germany's first female chancellor. And she only got into politics at age 35.

It's been a big year for Merkel, one which included wrangling Vladimir Putin on Ukraine, helping refugees from the Middle East and not budging on Greece's economic crisis. But she also has opponents on almost all of those issues. (Video via Channel 4)

Time chooses candidates based on impact, and that doesn't necessarily have to be positive impact. For example, one of the short-listed contenders was an ISIS leader.

Merkel's been chancellor for 10 years, and Germany now boasts one of the strongest economies in Europe, setting the precedent for other countries across the globe when it accepted hundreds of thousands of refugees. (Video via BBC)

Merkel joins the rank of the only three other women to have ever appeared solo on the Time Person of the Year cover. The last time was almost 30 years ago and was another politician, a former president of the Philippines.