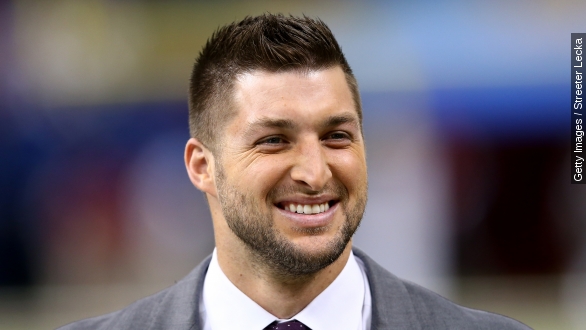 Tim Tebow has been given another shot at the NFL, as the Chip Kelly-lead Eagles continue their somewhat bizarre wheeling and dealing this off-season.

According to sources for multiple outlets, the 27-year-old former Heisman Trophy winner, who hasn't played a regular-season game since 2012, will sign a one-year deal with the Philadelphia Eagles Monday at the "minimum salary."

Tebow's signing by no means indicates he'll have a spot on the Eagles roster next season, especially considering how many QBs will be competing for the position.

He's set to join his former New York Jets teammate Mark Sanchez, ex-Rams quarterback Sam Bradford and two other QBs who will all battle for spots on the team.

But the three big names there also haven't been doing so well. According to ESPN, this means, "The Eagles [will] have under contract three of the five worst QBs in the league over the last five years."

Tebow definitely struggled during his first go in the NFL. His short regular-season career spanned from 2010-2012, where he threw for 2,422 yards and just 17 touchdowns for the New York Jets and Denver Broncos. He was later picked up by the New England Patriots but was cut after a sluggish 2013 preseason. Tebow finished his career with a Total Quarterback Rating of just 33.4.

But the potential return of "Tebowmania" has already created a huge stir. His legion of supporters made their voices heard on Twitter Sunday night with, let's call it a general state of euphoria. His opponents, meanwhile, were not so impressed.

Given the woes Tebow had already faced in the NFL, some in the media are already skeptical about the acquisition. Rant Sports called his return "Irrelevant" and Football.com labeled it "Terrible For Everyone."

Still, NFL Insider Adam Schefter points out, some believe Tebow, Sanchez and Bradford could all simply be pawns in a larger scheme the Eagles have planned for next season.

"I think there's also speculation here about the Eagles moving forward about whether or not they could be players for Marcus Mariota. There are still people who think they can be. We'll find out whether or not that happens a week from Thursday in the NFL draft," NFL Insider Adam Schefter told ESPN.

At this point, who knows what Chip Kelly has up his sleeve. But hey, it's certainly been fun to watch.