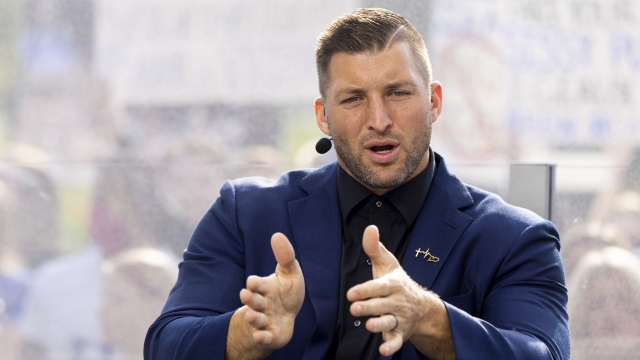 Tebow joins Newsy to explain how his company Campus Legends can help current and former college athletes capitalize on their name, image and likeness.

NEWSY'S ALEX LIVINGSTON: NFTs are coming to the world of college football. An NFT — in case you don't know — is a non-fungible token. It allows you to buy pretty much anything digital. So we're talking artwork, music or even someone's tweet.

NEWSY'S DAVE BRIGGS: It's fascinating. This week, the company Campus Legends is launching digital collectibles for current and past athletes from the University of Florida and several other colleges. The company is owned by the Heisman Trophy winner and two-time national champion Tim Tebow, who joins us this morning.

Good to see you my friend. So, you've done an awful lot. You jammed it in. National champ, NFL quarterback, Major League Baseball player, broadcasting whiz. So we get to put a different hat on you and you're our professor this morning, teaching us a thing or two about NFTs. What is a non-fungible token?

TIM TEBOW: Honestly, that's a really good question that I'm trying to learn right now. I like it in the intro that y'all show one of my most vulnerable days of all time. What if I showed y'alls hardest day and that's how I intro'd you guys?

LIVINGSTON: I love it though.

TEBOW: Honestly, thank you. Thank you for having me. I really appreciate it. NFTs, honestly the easiest way to think about it for someone that's never heard or never seen one or never been a part of, you know, a premiere marketplace, is back in the day when we used to collect trading cards, You get your favorite team. I got Emmitt Smith or Frank Thomas or Ken Griffey, and we have the cards. Well just think about it today as a digital version of your favorite cards or your favorite place or your favorite things, you know, whatever that is. It could be a painting like you said. It could be a tweet. I probably would lean away from more of the tweets and maybe more for some of my favorite players. But I think that's one of the more kind of, I don't know, easy ways to explain it. It's still a collectible of your favorite things and whatever area that is interesting.

LIVINGSTON: Interesting. So, I want to learn more about Campus Legends. Can you tell us and the viewers what you're doing with Campus Legends and what inspired it?

TEBOW: Honestly, what inspired me was a few things.  All the new rules with the NIL — name, image and likeness — is opening up a lot of new doors and it's something that, you know, I think a lot of people are trying to figure out this new marketplace. So I just, honestly, talking with a few people that were in this space and thinking, you know, I wonder if there's a way that we could do something that is for profit, but also for a purpose and it's, you know, any time I get involved with something that is for business, it's not just because I want to make money or succeed at it, but it's also got to be for a purpose. And for me that's what Campus Legends is all about. We think that we can be a premier option for people with NFTs from their favorite teams, their favorite universities, but also for a purpose. We actually have two really cool things associated with Campus legends. One is a five-for-all fund. In schools we're giving 5% to spread out to all of the athletes, even the ones that aren't necessarily making the money. And also Helping Hands Foundation is tied to it as well, where we want to be able to take a portion of profits and be able to help student athletes or former student athletes who are down on their luck and maybe hurting or maybe their families struggling and we can step in and help them. And I think also something that was very important to me and this was, you know, we're connecting the university with the student athlete or the former student athlete with the fan base and so all of them are coming together. To celebrate their old times. To celebrate their favorite games. To celebrate Nebraska in the '90s and Tommie Frazier. To celebrate, this is hard for me to say, but Florida State — with Coach Bowden and Charlie Ward and Warrick Dunn and all those guys — and being able to connect them with their fan base, the university, and it's a win-win win for all of them. When we're able to kind of finalize some of this stuff, we're like, man, this could be really cool, we're connecting the fan, we're connecting the university, we're connecting the coaches and the players. So they all get to relive all of these awesome moments.

BRIGGS: I'm guessing a few people want to relive the jump pass against Oklahoma down there inside the 10 yard line. One of the all-time great sports moments. You mentioned the name image and likeness changes to the NCAA. What do you think of those? And how can this help guys that haven't been able to make the money like you did or like Joakim Noah did with the Florida Gators basketball team? How can it really help level the playing field for those guys that aren't able to capitalize?

TEBOW: Well, honestly, when the name image and likeness thing came out, I was kind of skeptical. Like man, how are we going to, you know, stop this from, you know, getting all the way down to 12-year-olds? And I still think there needs to be a little bit of work to figure all this out and in the recruiting game. But I also think it gives an awesome opportunity for student athletes now. And then with Campus Legends, also former student athletes. I think for student athletes to be able to be part of this, to be able to make a profit from it is big. The student athletes get 25% of this on the premiere and that's a primary. There's also a secondary where they'll continue to make money from it. The more it sells — and it can sell and sell and sell just like if someone put something back up on eBay. With Campus Legends, you will be able to do that as a primary and also as a secondary, which is really cool. So they'll be able to make profit from it. But I also think it connects them with their fan base. I think it connects them with the university and it really ties it in for them to be able to come up with fun things with their personality. Some of the players, they love wearing bow ties or fancy suits before games and so, you know, for some of them they're like, hey, can we do something like that? It's like, absolutely, so that's you, that's personal to you. And so their fans can really connect with them in a real personal way, but it also gives them a chance to, you know, succeed financially as well.

LIVINGSTON: So many times you feel like these professional athletes or collegiate athletes, they have this screen in front of them. You can't really touch them. You can't really talk to them. So I'm assuming that connection is going to be really huge. I want to switch gears a little bit here. Your former coach at Florida, Urban Meyer, took a lot of heat early in his tenure with the Jacksonville Jaguars. I lived in Jacksonville, so I know TIAA Bank Field is just not packed now at all. But they beat the Bills last week and nearly upset the Colts. So how do you think he's doing?

TEBOW: Well, just from the last two weeks you can see that they really started to turn the corner a little bit. I think their team is playing really hard. I mean, look at the way that they played yesterday and they're flying around. Their defense is playing so hard. Special teams playing hard. The offense is improving. I think that, you know, it obviously hasn't probably been the season he was hoping for, but I think that they're working hard. I know he's always going to be someone that's going to miss a lot of sleep because he's putting in so many hours.  I think the one thing you can say is this team is playing extremely hard and honestly that's the most that you can ask.

BRIGGS: Yeah, he's a lightning rod and anytime you've got guys flying around and not quitting at that level it says a lot about what he's brought to Jacksonville.

Tim Tebow. The website is Campuslegends.com. I can't wait to check out some of these NFTs. I appreciate the time.

TEBOW: I love you guys. Thank you.