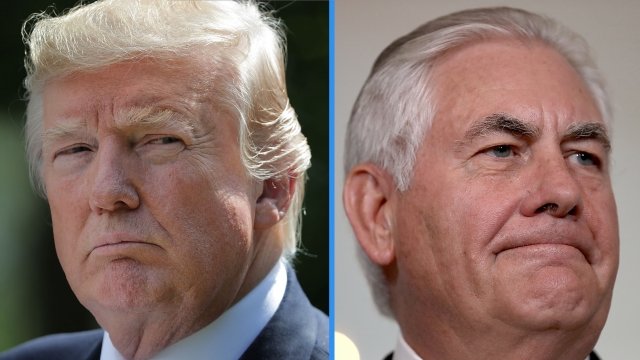 President Donald Trump seems to be drawing a line in the sand when it comes to North Korea's nuclear ambitions. But his State Department is taking a more diplomatic approach.

Asked about the country, Trump told reporters: "They will be met with fire and fury like the world has never seen."

But U.S. Secretary of State Rex Tillerson later told a reporter: "I think Americans should sleep well at night, have no concerns about this particular rhetoric of the last few days. ... I think what the president was just reaffirming is the United States has the capability to fully defend itself from any attack."

Tillerson told reporters that the U.S. was looking to diplomacy to end North Korea's nuclear threat. He sought to cast Trump's comments as the sort of tough talk that North Korea would respond to.

But that's not what a lot of people are hearing. 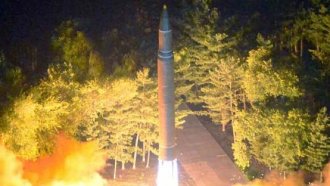 Sen. Lindsey Graham told CBS: "President Trump has basically drawn a red line saying that he'll never allow North Korea to have an ICBM missile that can hit America with a nuclear weapon on top."

Trump's "fire and fury" quote was widely cast as a clear threat of military intervention if North Korea doesn't reign in its nuclear program.

The U.S. and North Korea have been exchanging charged rhetoric for years. But if North Korea keeps up its aggression, Trump might have to choose between following through on his threats or surrendering some U.S. credibility on the world stage.

And North Korea isn't showing any sign of backing off, recently threatening to bomb the U.S. territory of Guam.

The New York Times reports Trump didn't run his "fire and fury" remark by the White House first — but officials say Trump's comments were in line with the type of message the administration wants to send.